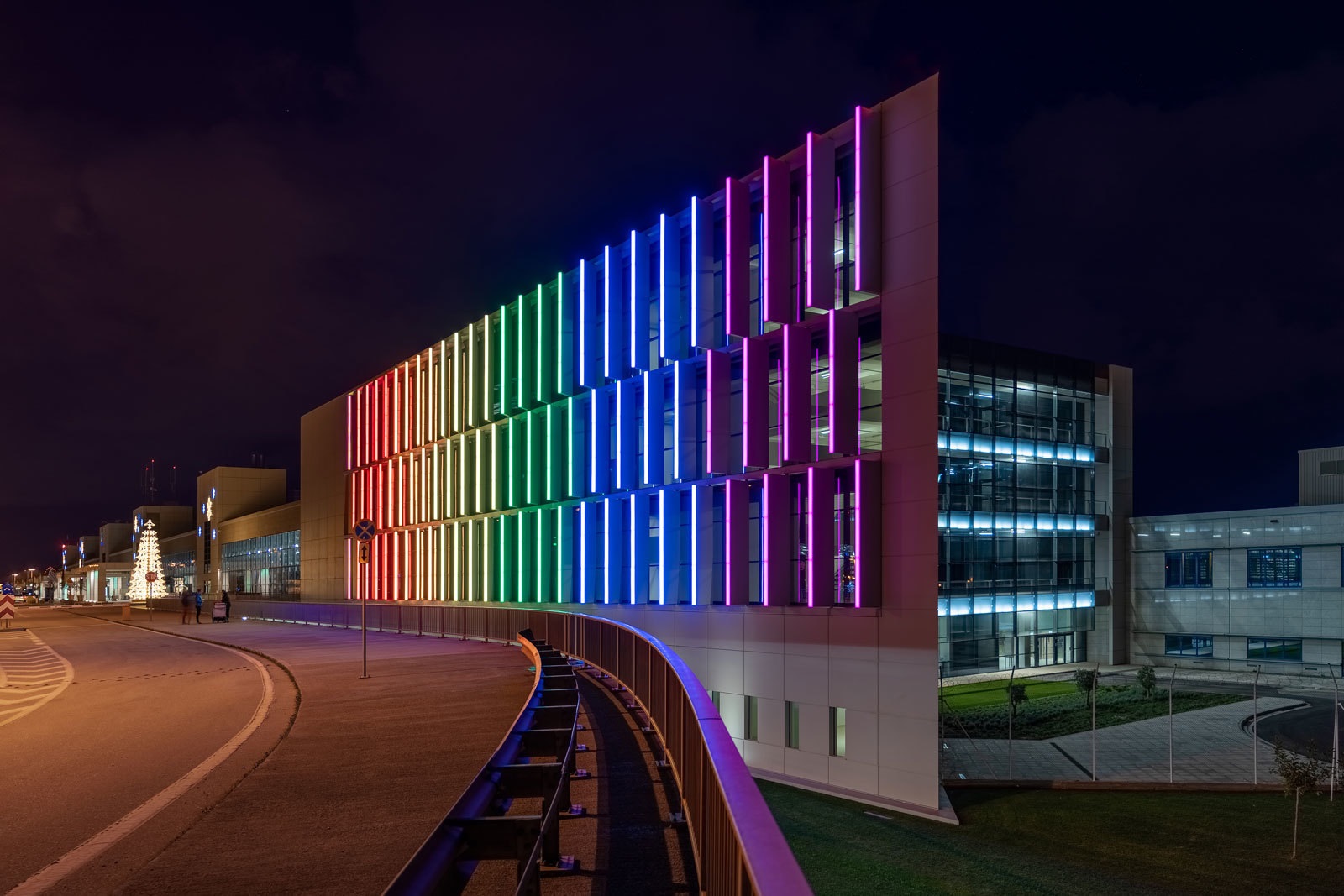 Athens, Greece
Façade lighting in the heart of the Greek capital

Athens International Airport was recently subject to redevelopment, which saw its expansion with a new building to the south and the realisation of a lighting project curated by Eleftheria Deko and Associates, one of the most prestigious lighting design studios in Greece, with extensive experience in the field of lighting both in public and private spheres, thanks to a multidisciplinary team able to provide integrated solutions and all-round design approaches.

The client’s initial request was to remain faithful to the original architectural design, whilst renewing the materials and technology of the construction systems. The extension in the southern area thus gave way to a re-evaluation of the façade and morphology of the building, improving the design of the entire complex.


A RAINBOW OF LIGHT

The operation gave way to the implementation of a complete redevelopment of the building some 20 years after the realisation of the original project. The AVW Architecture studio rethought the entire structure, with a southward expansion that was emphasised thanks to a collaboration with the award-winning lighting design studio, Eleftheria Deko and Associates.

The focus of the façade lighting project was primarily the frontal exterior of the new wing, immediately visible upon arriving at the airport and illuminated thanks to a combination of professional solutions chosen in partnership with the Linea Light Group design team.

Internally, Rada downlights have been installed in the wing dedicated to low-cost flights, being perfect for illuminating passageways and large spaces due to guaranteeing the total absence of direct glare, whilst ensuring uniform and homogeneous light.

The objective of the outdoor lighting project was to emphasise the main façade of the new building, which represents the most visible part for those arriving at the airport due its position on the major roadways.
The fil rouge of the operation was to create high-impact lighting, a sculpture of illumination that shines in the night sky of the capital.

For this purpose, a custom version of the Paseo linear profile was designed. Indeed, its extreme versatility has made it possible to create a “giant” model that can be recessed directly on the sunshades of the structure, to give life to spectacular and evocative effects.

The conception of Paseo Giga (as has been defined by the entire team involved in the work) has been long and laborious, starting with the creation of an aluminium recessed casing to be installed inside the sunshades with the dual task of encasing the electrical wiring (with all Paseo modules being RGBW and managed individually by a DMX control unit) whilst also allowing the practical recessing of Paseo Giga.

With 253 modules in polycarbonate and with an IP67 to withstand the elements, the result achieved is spectacular. Simple and elegant white lines intersperse with colourful scenery, with static or dynamic effects, which define or soften and turn on or off.

Finally, great attention to detail has been paid to the less visible sides of the building, where Archiline PRO profiles have been fitted in the 4000K monochrome version, managed with the DALI protocol and flanked by a custom version of Thin66, the linear profile that emits a diffused light that, thanks to its minimalist design, adapts to any type of installation to accentuate architectural details and features whilst emphasising the façades with character and elegance. 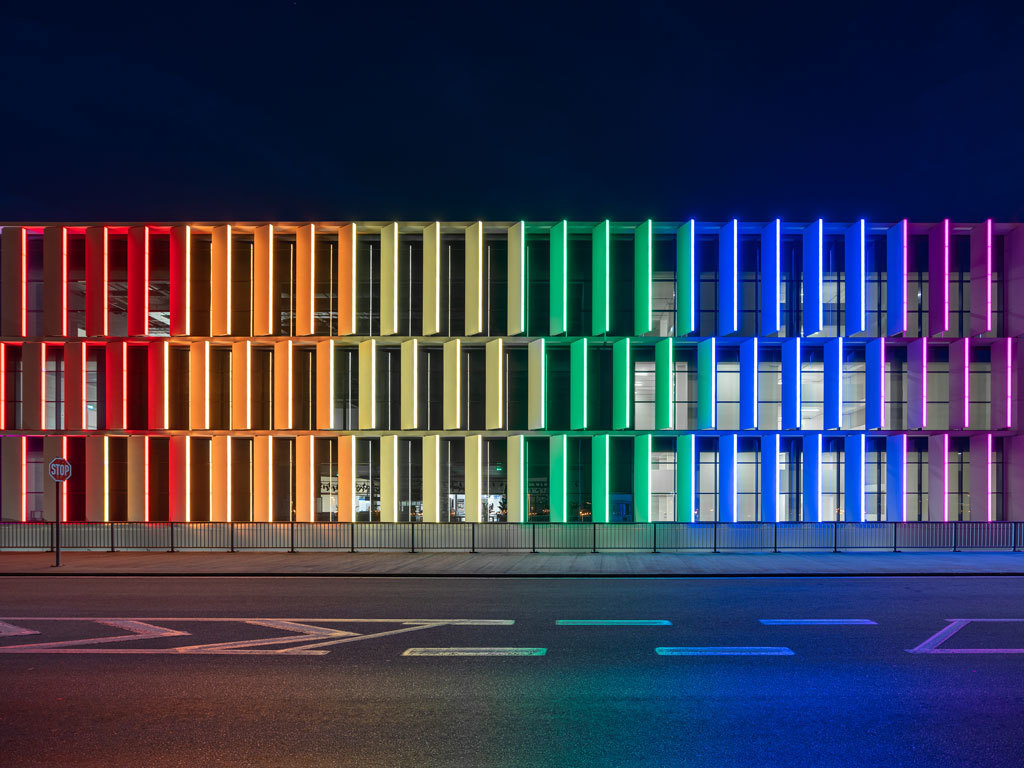 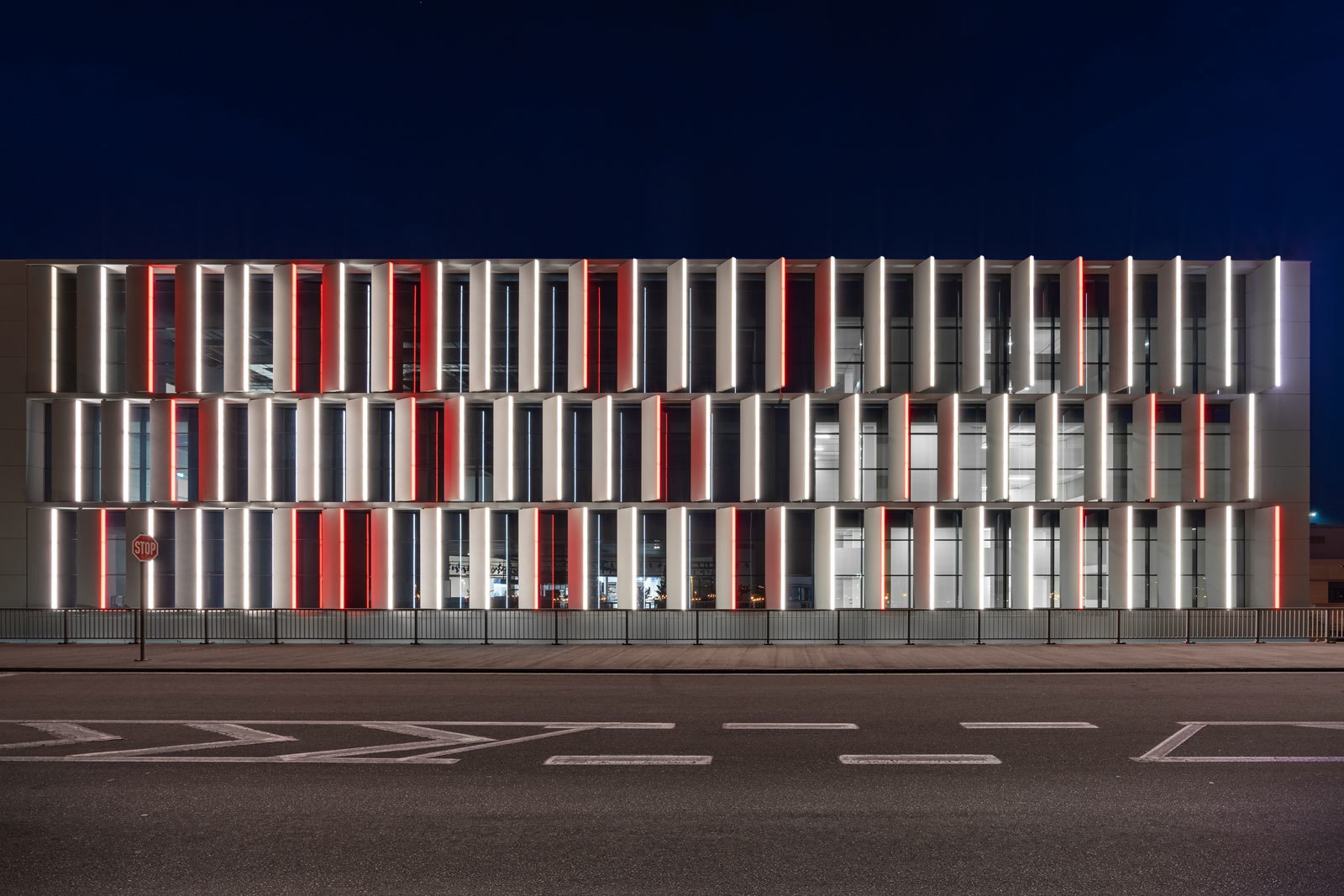 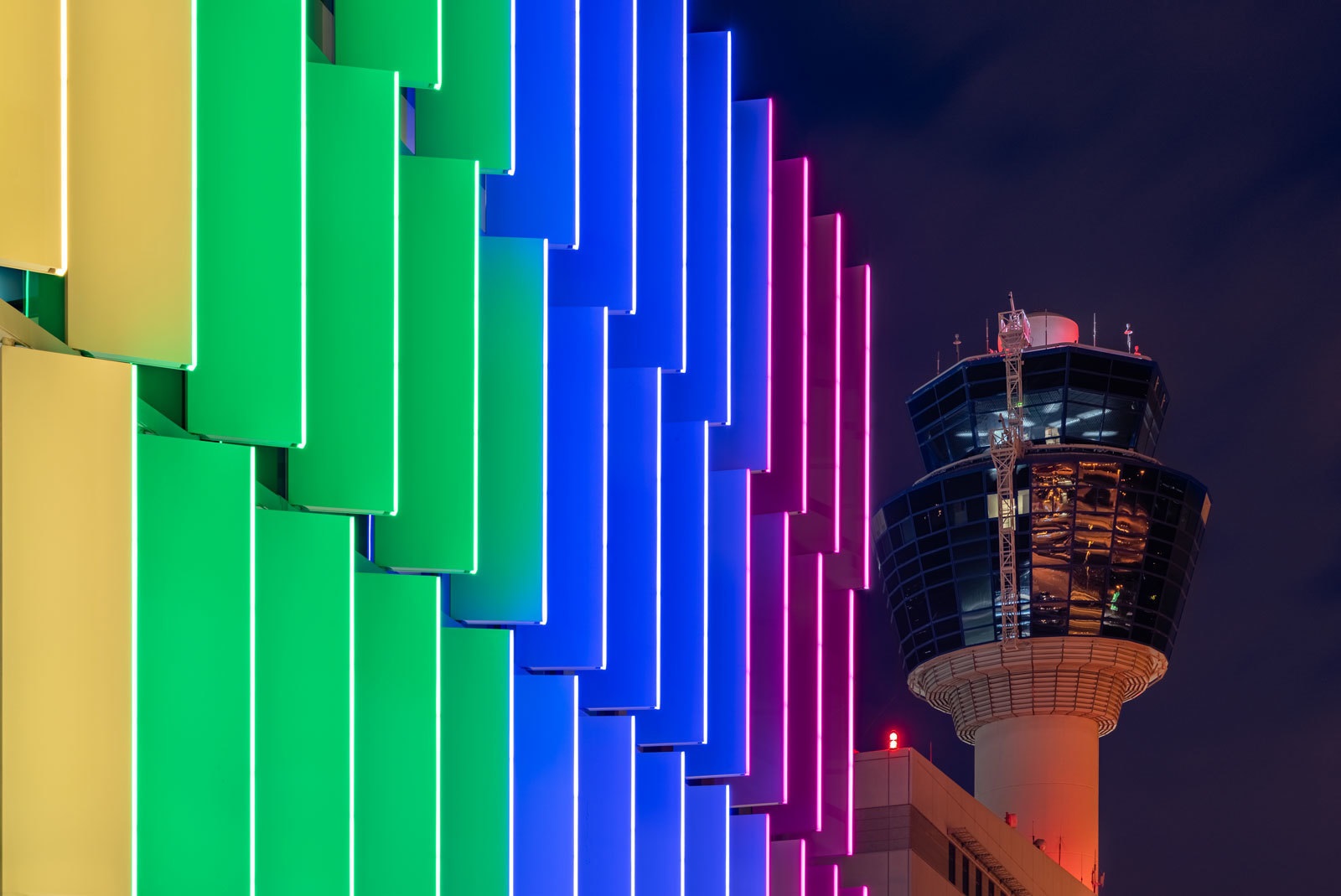 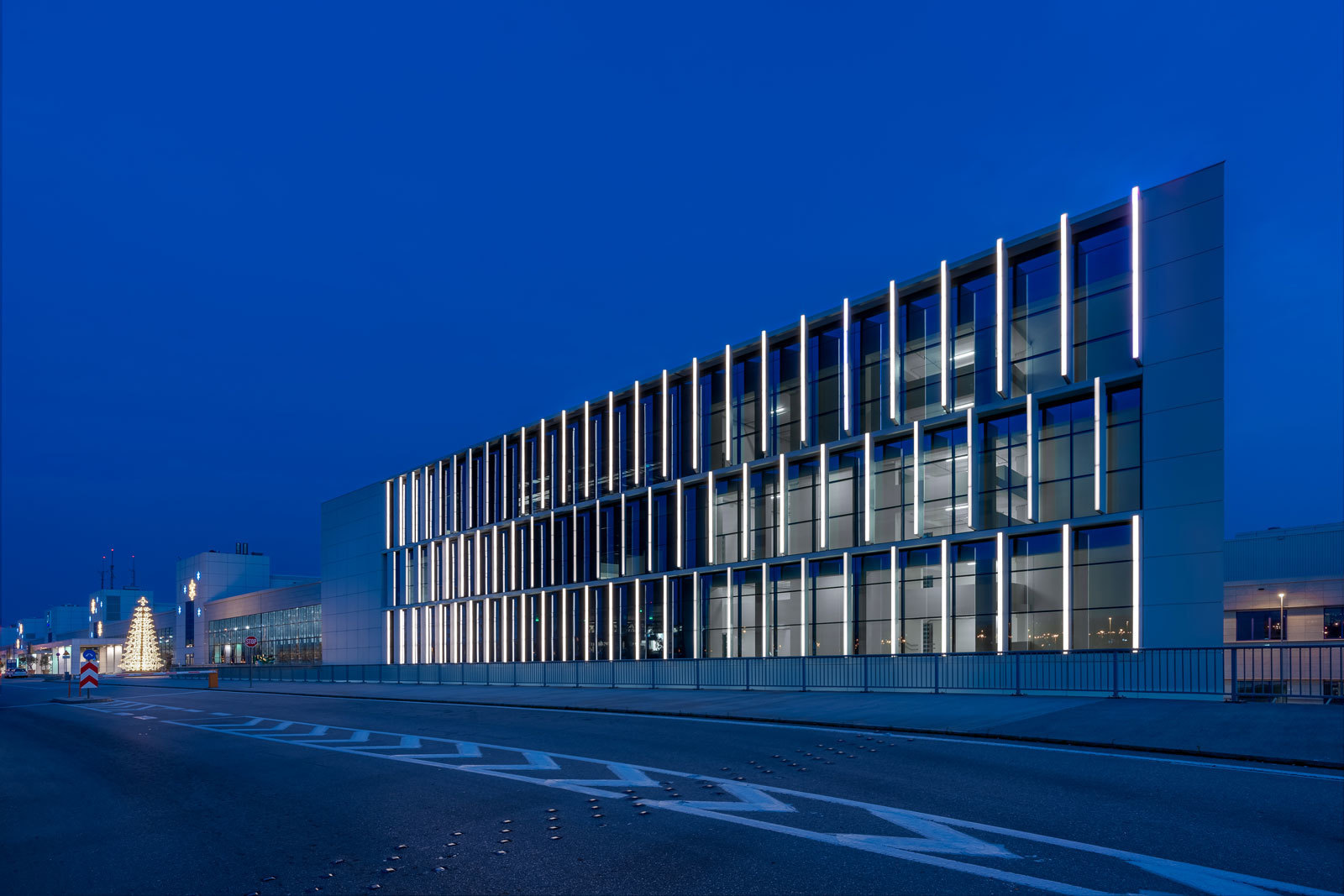