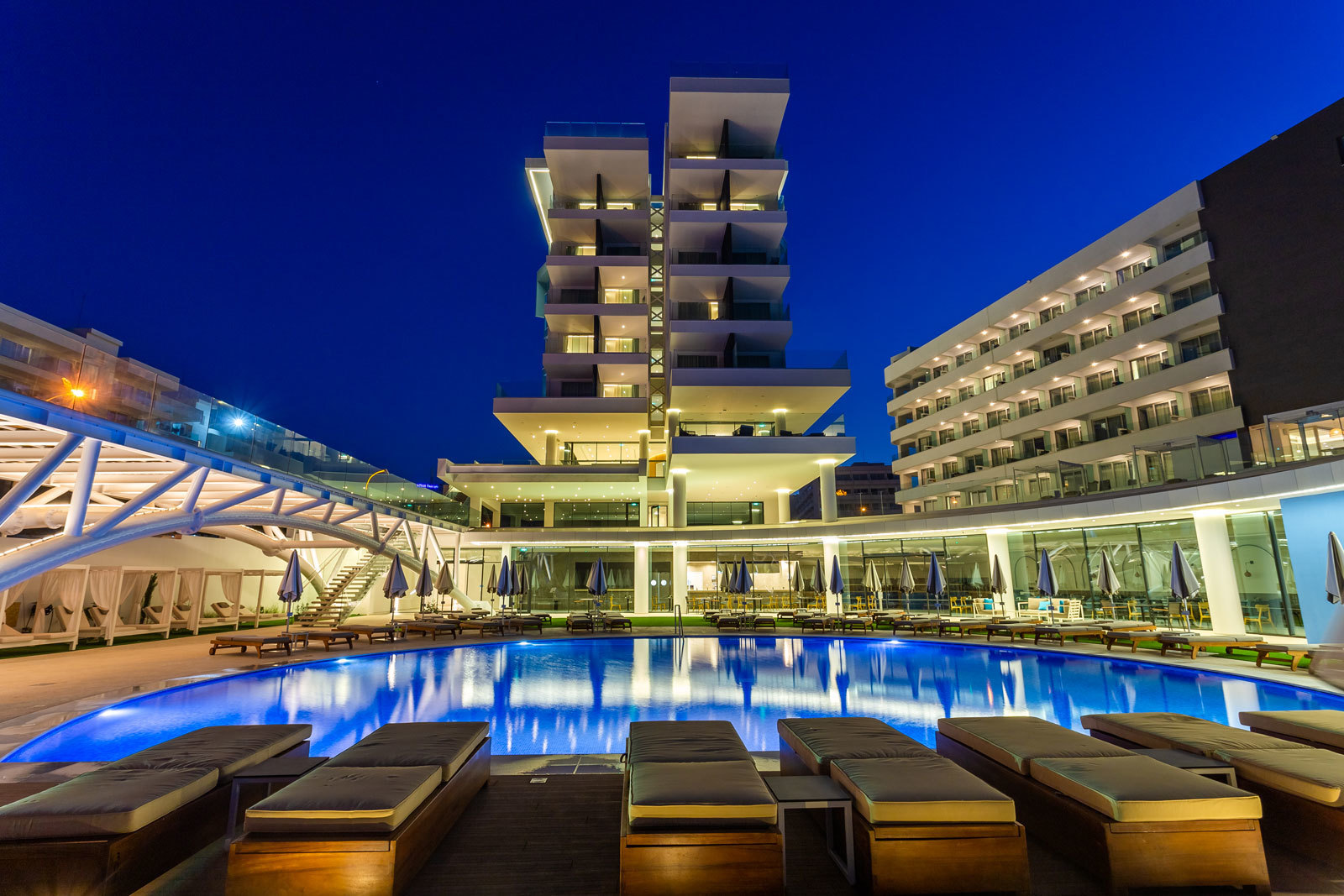 A paradise of light

Escape the ordinary. This is the presentation of the new hotel in Cyprus, that was officially opened in July 2021 and has rapidly become a highly popular tourist destination. On the one hand, the location, one of the most beautiful beaches in the heart of Protaras in the Famagusta area (awarded blue flag status), amidst the crystal clear waters of the Mediterranean and surrounded by breathtaking views, has greatly contributed to making it one of the most spectacular and sought-after destinations. On the other hand, the architectural project behind the construction of the hotel, producing an authentic gem showcasing a contemporary design and the meticulous care taken over even the smallest of details, featuring materials like glass and wood, combined with pristine white walls. And last but not least, an in-depth study of the lighting to enhance every single detail. Welcome to paradise!

To naturally blend the view of the city with the sea. This is the concept behind the architectural project designed by Constanti Architects - ENAprosEKATO in Nicosia, renowned for their numerous projects aimed at maintaining the balance between the quality of architectural design, visual appeal and the environment. In the construction of the Flamingo Hotel, laid out over eight floors, the street level was used as a dividing element: with the rooms above it and the communal areas, such as restaurants, bars, etc. below. This made it possible to achieve not only an unobstructed clear view of the sea but also a straight path (accessible to both hotel guests and local residents) that, from the street level, runs through the building terminating either on the beach or the panoramic deck, from where you can enjoy (once again) a magnificent view of the sea. The study of the lighting gave an added edge to the project through the installation of numerous indoor and outdoor lighting fixtures by IFI Group in collaboration with Linea Light Group.

The lighting project expertly enhanced the hotel’s architecture, highlighting the details and distinctive traits of both the rooms and the exterior. A variety of Linea Light Group products were used, all in the standard versions available in the catalogue.
Starting with the indoor lighting, solutions were used in the rooms featuring, for example, Cob_40, a compact, but highly efficient downlight, set in the ceiling to create diffused, uniform lighting. This was combined with the LED strip light, Rubber 2D Mini, which was used to highlight the curve of the semi-circular headboard thanks to its flexible, slimline installation, measuring just 6 mm, which allows the design of a high-performance custom project using a concentrated, ultra-thin light circuit. Lastly, the LED strip light, Ribbon, with aluminium profiles, was used above the sea-facing windows. The same light was also used to illuminate the mirror and television. On the exterior of the rooms, the discrete, recessed spotlight, Picrol, was chosen for its ease-of-installation, making it suitable for any setting.

In the dining hall, the Loro_R recessed downlights were installed, while the Woofer downlights were chosen to illuminate the counter. The LED strip light, Rubber, was used to highlight the curved false ceilings with a wave of light over the service area. Lastly, Baton pendant lights and Rollip linear elements were laid out in a square and installed over the service desks in the dining hall. For glare-free spot illumination.

Great care was taken over the lobby area, with a meticulous, contemporary design featuring natural materials such as wood, showcased by the skilful use of lighting. This area features pairs of Loro downlights, plus Anton downlights to create a sort of “constellation of lights”. The reception is lit by Poe_Plus dome-shaped pendant lights with minimal, elegant lines which illuminate the area below with diffused, clear light. Lastly, in the bar area, an elegant and modern combination of Tour pendant lights, in the PD and PI versions, is featured alongside the Loro downlights. The Poe pendant lights, installed above the bar counter, together with the Anton downlights, add the final touch, creating a spectacular starlight effect once again.

The lighting project also included the use of Linea Light Group products outside as well, aimed at discretely and elegantly highlighting the entire building. To showcase the architecture, both vertically and horizontally, for example, the LED strip light, Rubber 3D, was chosen, which was also used on the support columns at the entrance. The Loro_R downlights were recessed here in the false ceiling to inject an added touch of elegance into the area. Lastly, the versatile and technological Shaker projectors, with adjustable optics to allow spot illumination, were installed to illuminate the green spaces on either side of the steps at the entrance.

Great care was also taken over the street lighting in front of the hotel. The roundabouts were illuminated with the high protection version of the LED strip light, Rubber, while the compact, adjustable Clivo projector was chosen to efficiently direct the light and thus highlight the olive trees planted in the middle of the roundabouts. Perfect for highlighting details. Lastly, to finish, the slimline lighting fixture, Mini Parker, was deployed. The wide range of power, with LED colour temperatures and different optics, fulfils numerous lighting requirements.

The lighting project is completed at the rear of the hotel featuring a spectacular bridge which connects the building with the sea. The LED strip lights, Rubber, were installed on the curved profiles of the bridge to showcase the details and highlight the overall structure. The result is diffused, evocative lighting which accentuates the bridge and blends perfectly with the surroundings. A sculpture in light projected towards the sea. And lastly, to illuminate the external beach bar, the LED strip light, Rubber, runs along the edge of the structure, showcasing the architecture, while Loro downlights are used for the counter. 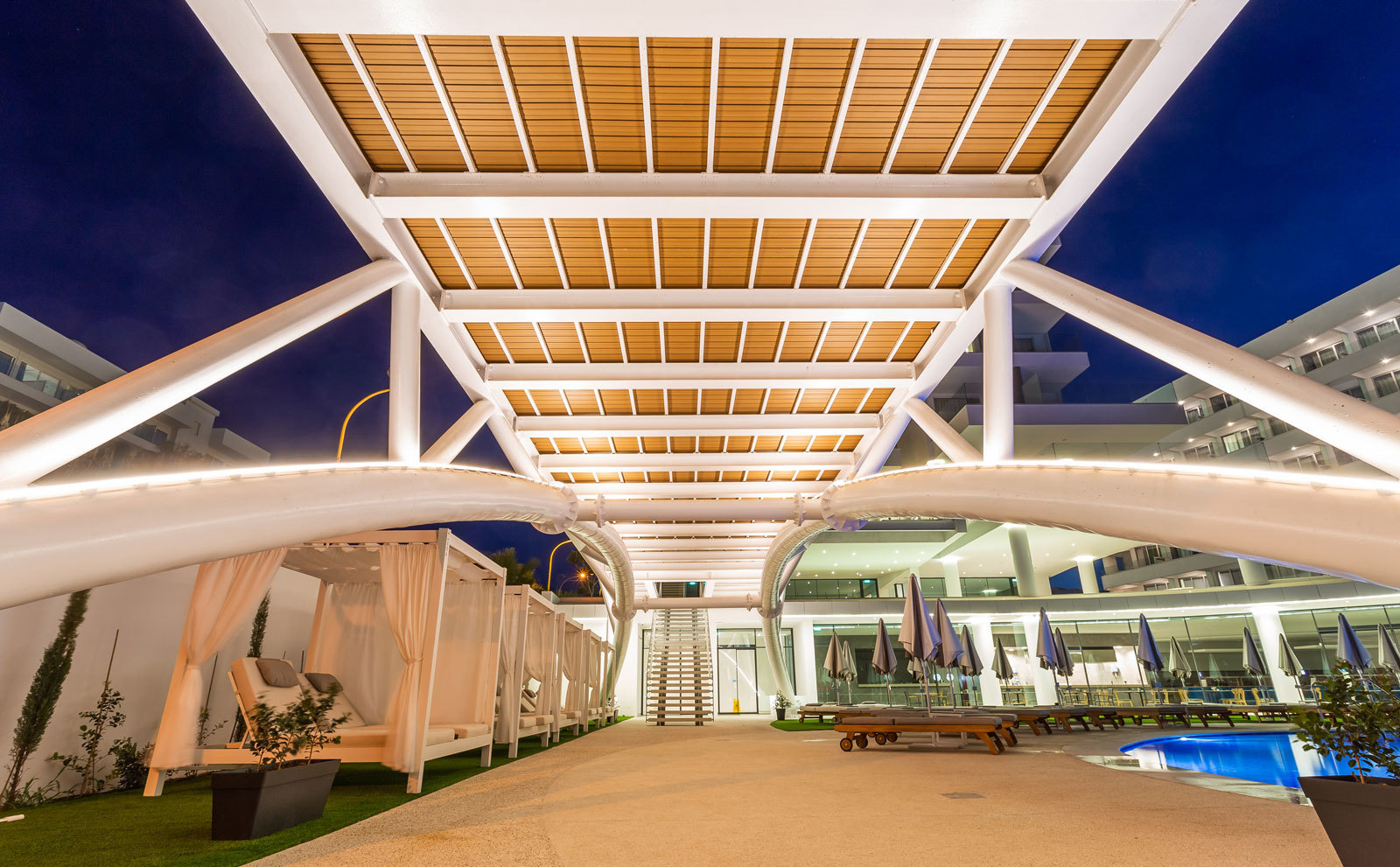 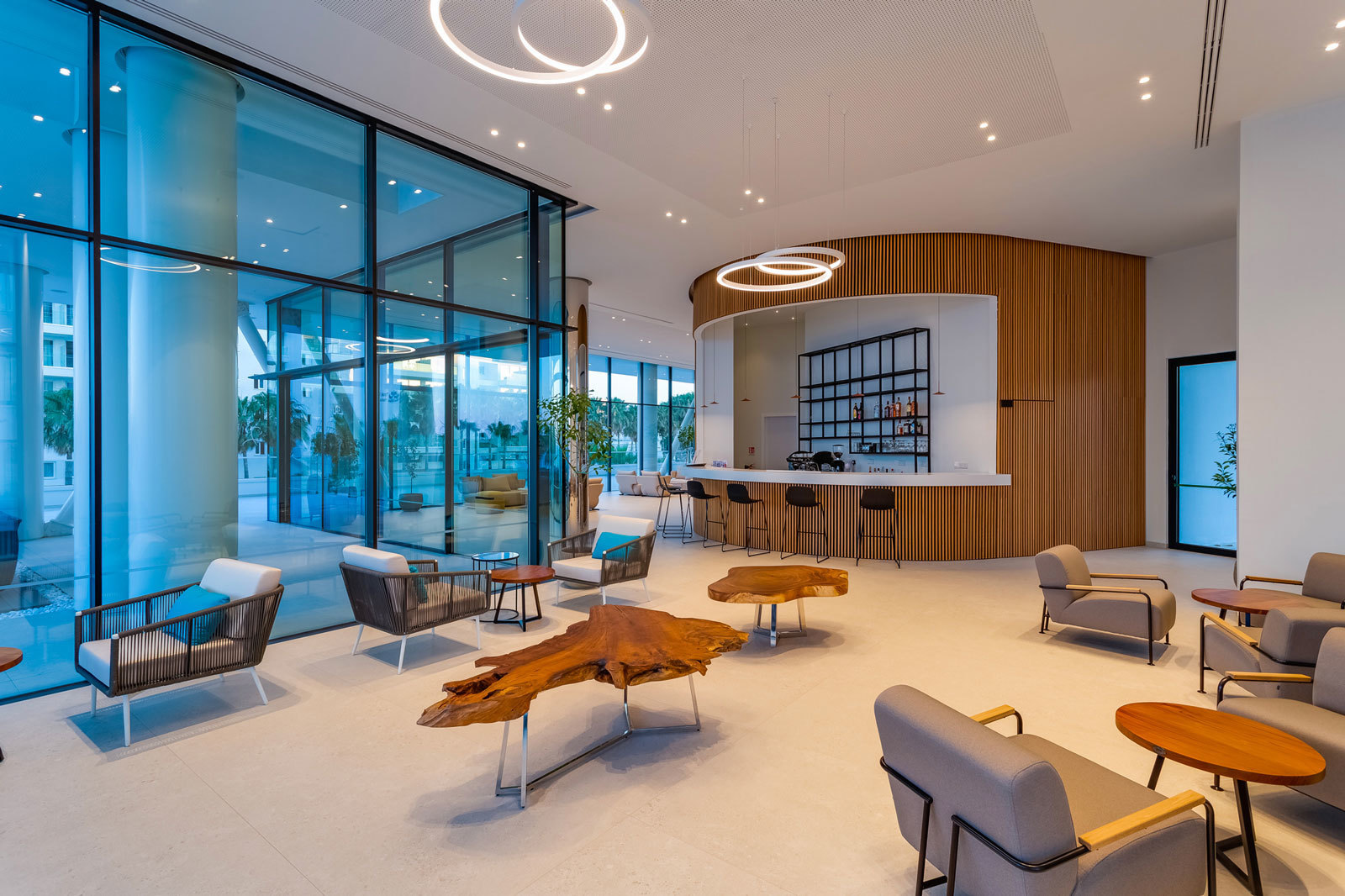 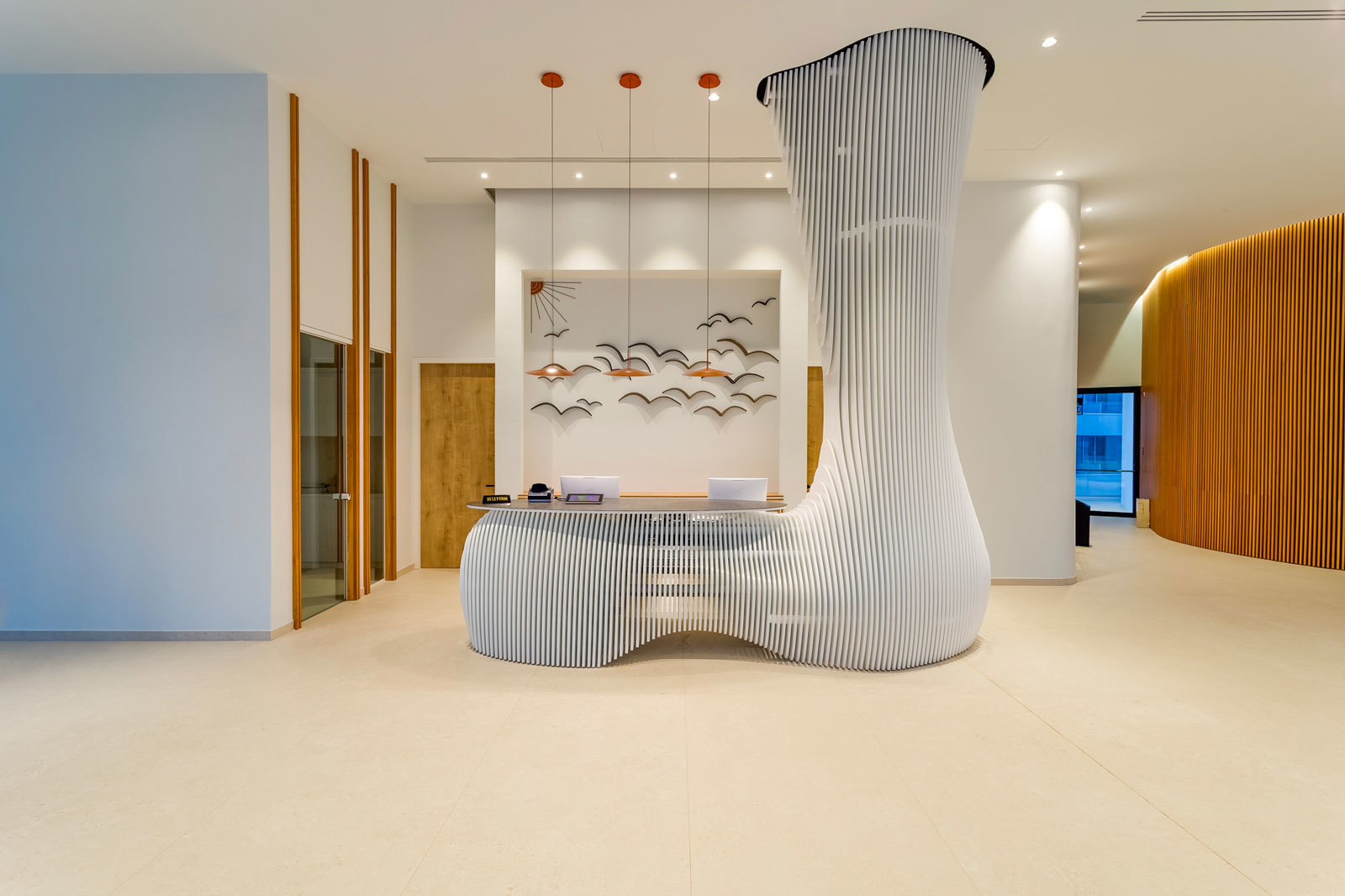 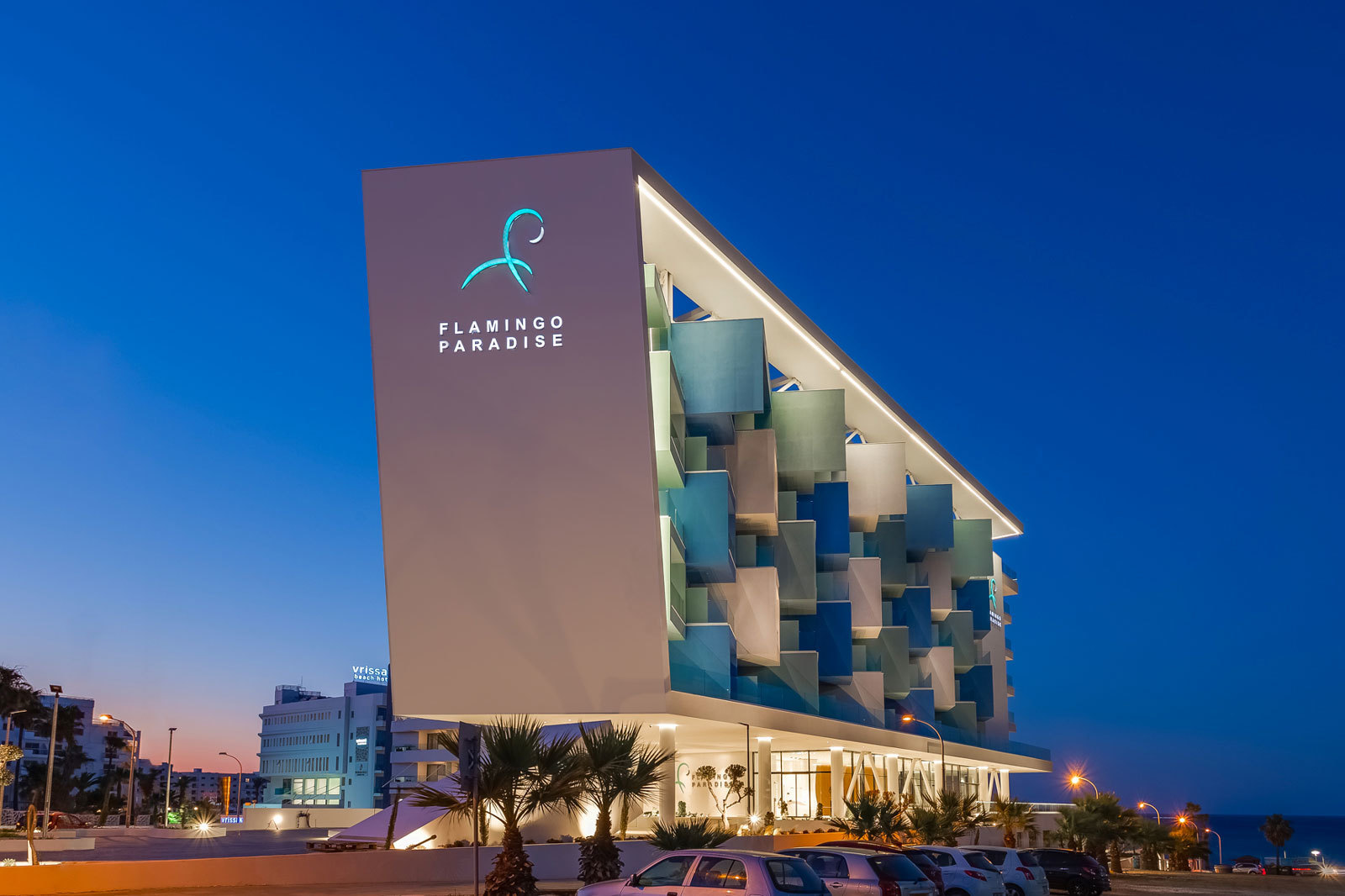