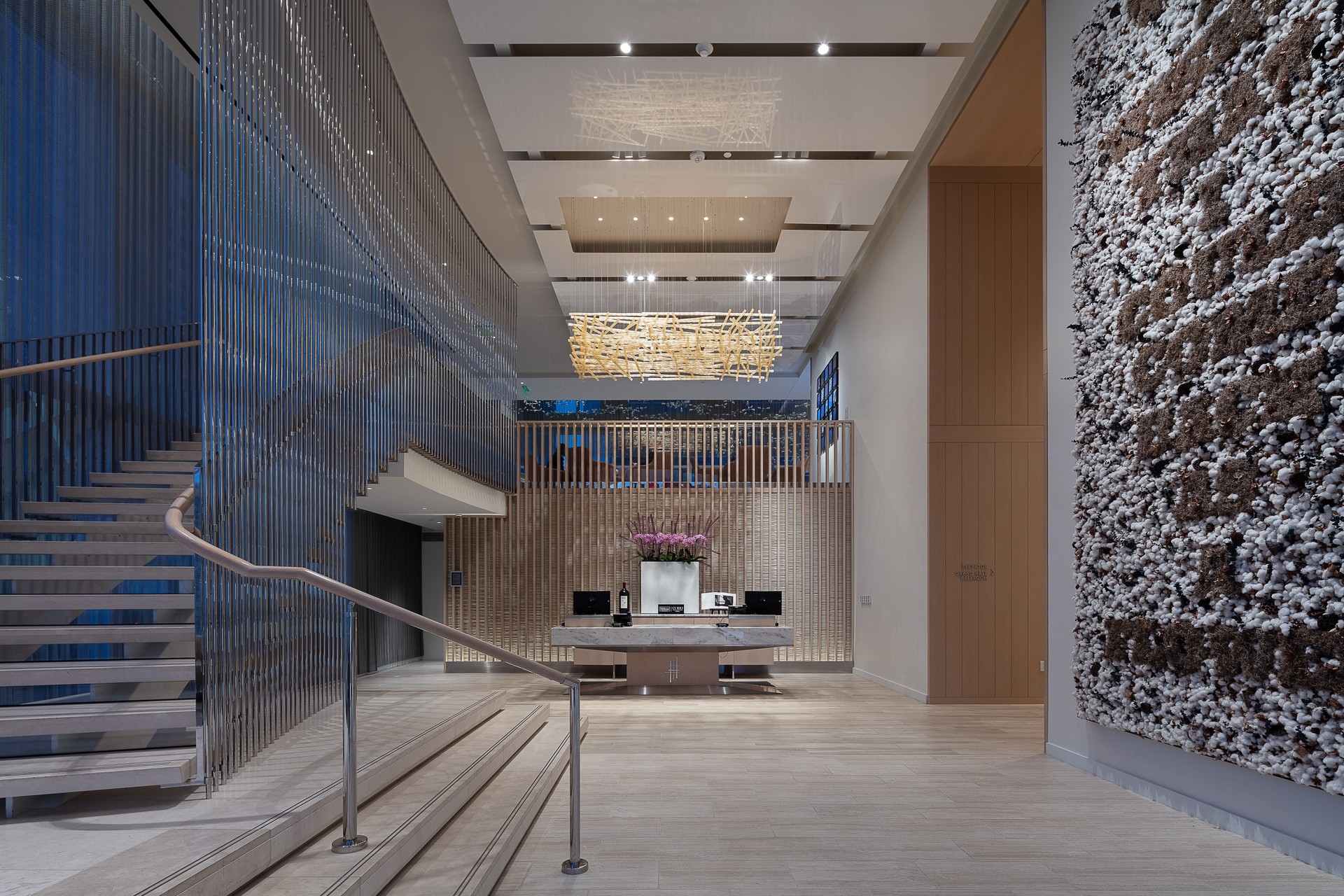 A spirit of freedom with a distinctly windy, airy feel fills the Hall Arts Hotel in Dallas thanks to LASVIT’s two bespoke lighting installations, bringing beauty and a piece of the Bohemian soul into the hotel’s lobby and banquet hall. Allow yourself the luxury of art.


Nature showplace for hundreds of artworks

Hall Arts Dallas is the only hotel located in the Arts District known for its museums and theaters. This district is home to some of Dallas’ most significant cultural landmarks, including facilities for visual, performing, and developing arts. Both LASVIT installations found their inspiration in nature, and here they become real objets d’art.

It is the first of the bespoke lightings you see right after entering the hotel. The Bird’s Nest, designed by Linda Šormová Melichová, fills the hotel lobby with a golden glimmer.

The light amber and golden glass tubes are seemingly chaotically scattered on the ceiling, like ears of grain, but after closer look you see the pattern’s underlying logic and its specific arrangement.

A scrum of 120 lighting branches make a real home. “The sculpture depicts ‘ordered chaos,’ and the spaces between the individual tubes are reminiscent of a bird’s nest. As if the tubes spilled into a regular shape,“ describes Melichová.

Want to experience a true autumn in Texas, no matter the season? Another installation in the banquet hall is reminiscent of it at first sight, because its hand-blown components look like 500 technicolored leaves.

The glass sculpture in the banquet hall is the work of Jana Růžičková. “I was inspired by that moment when the wind is playing with colourful leaves, bathing them in the light of a setting sun,“ she says. Do you feel the mood of an Indian summer afternoon?

Components hanging on thin wires give the sculpture an atmosphere of leaves levitating in the soft breeze.


Each piece is different

Each glass component is shaped by hand by the glassmaker and each is therefore a bit different. The mood of the setting sun is set by the colours which play with shades and hues of amber and champagne. 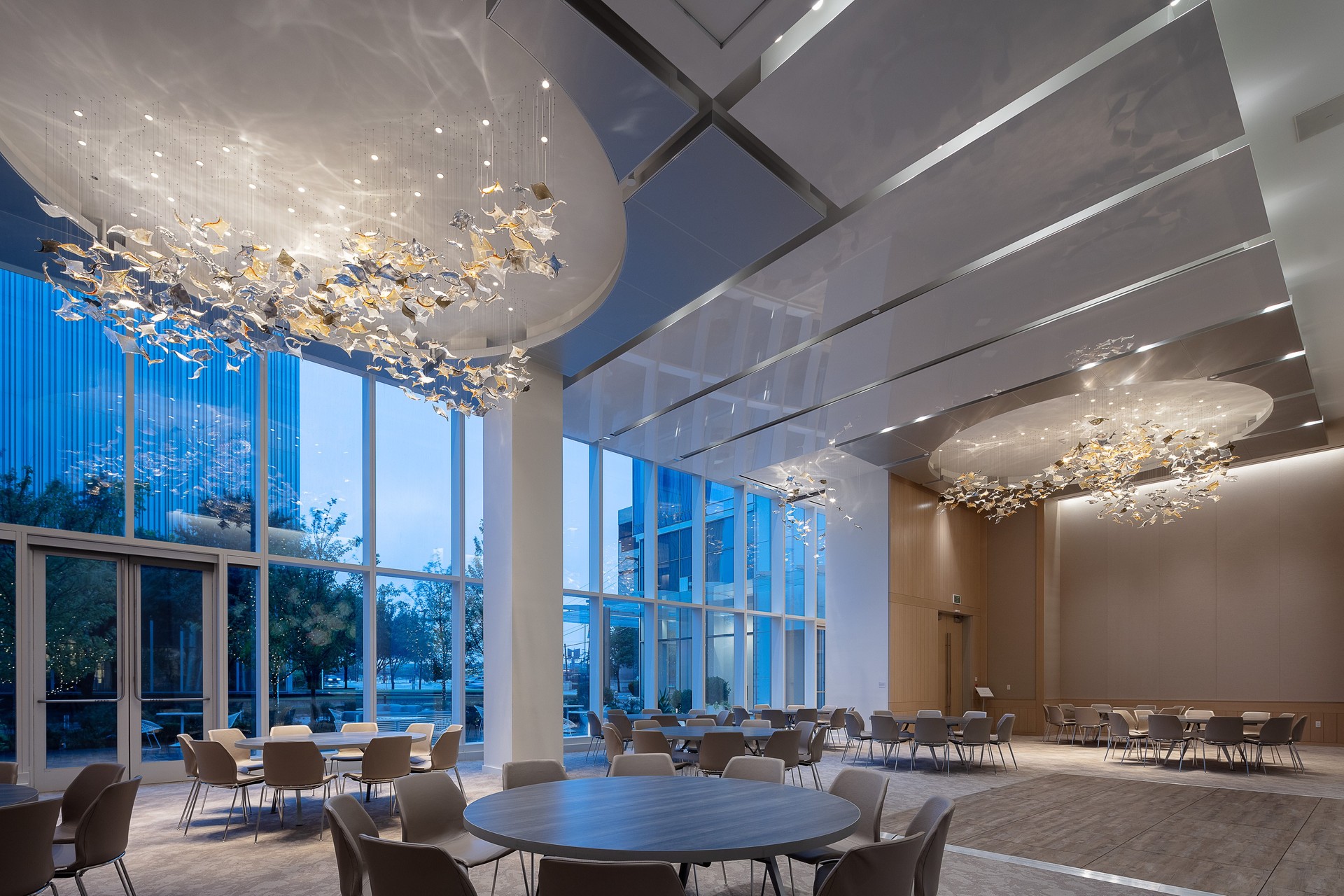 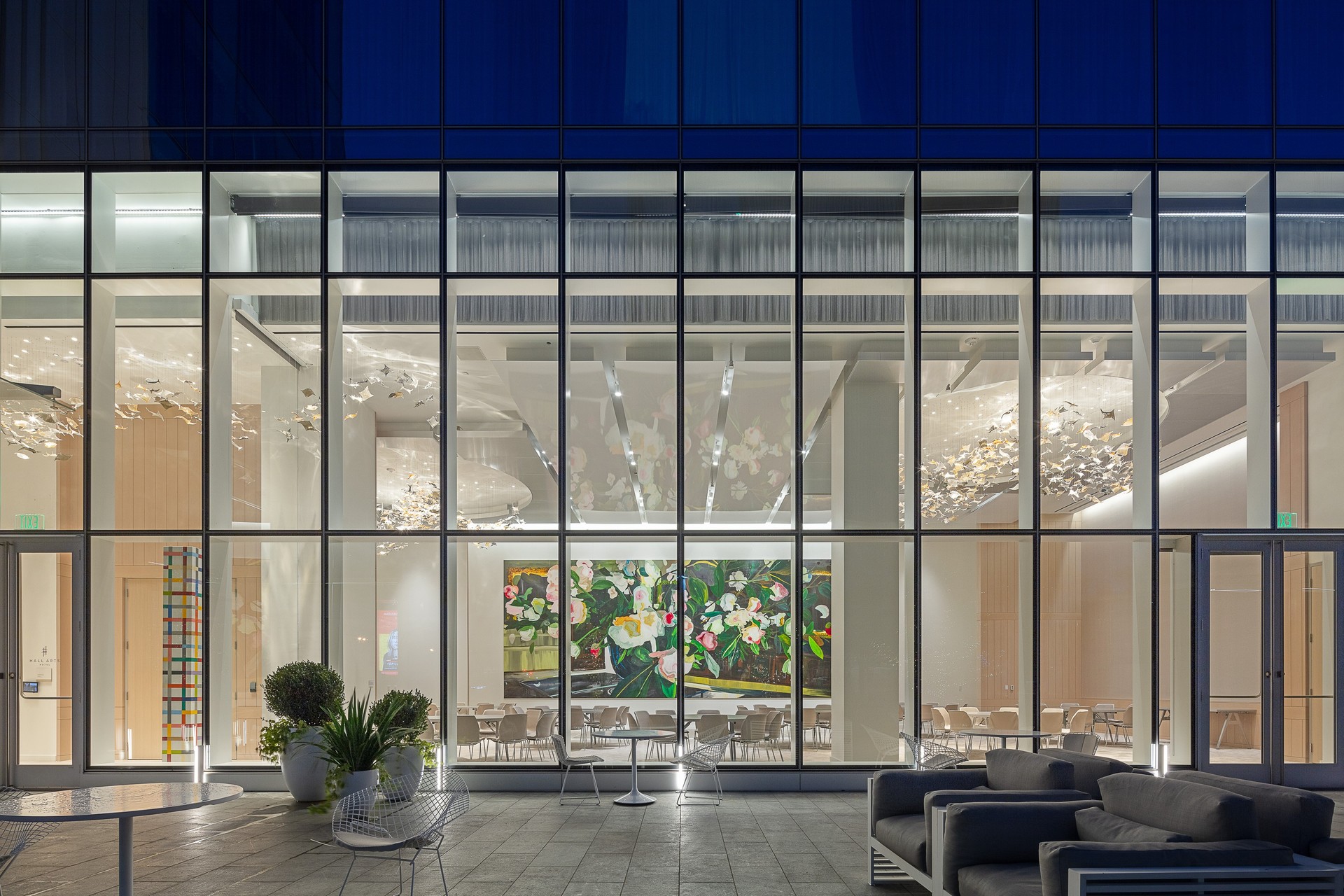 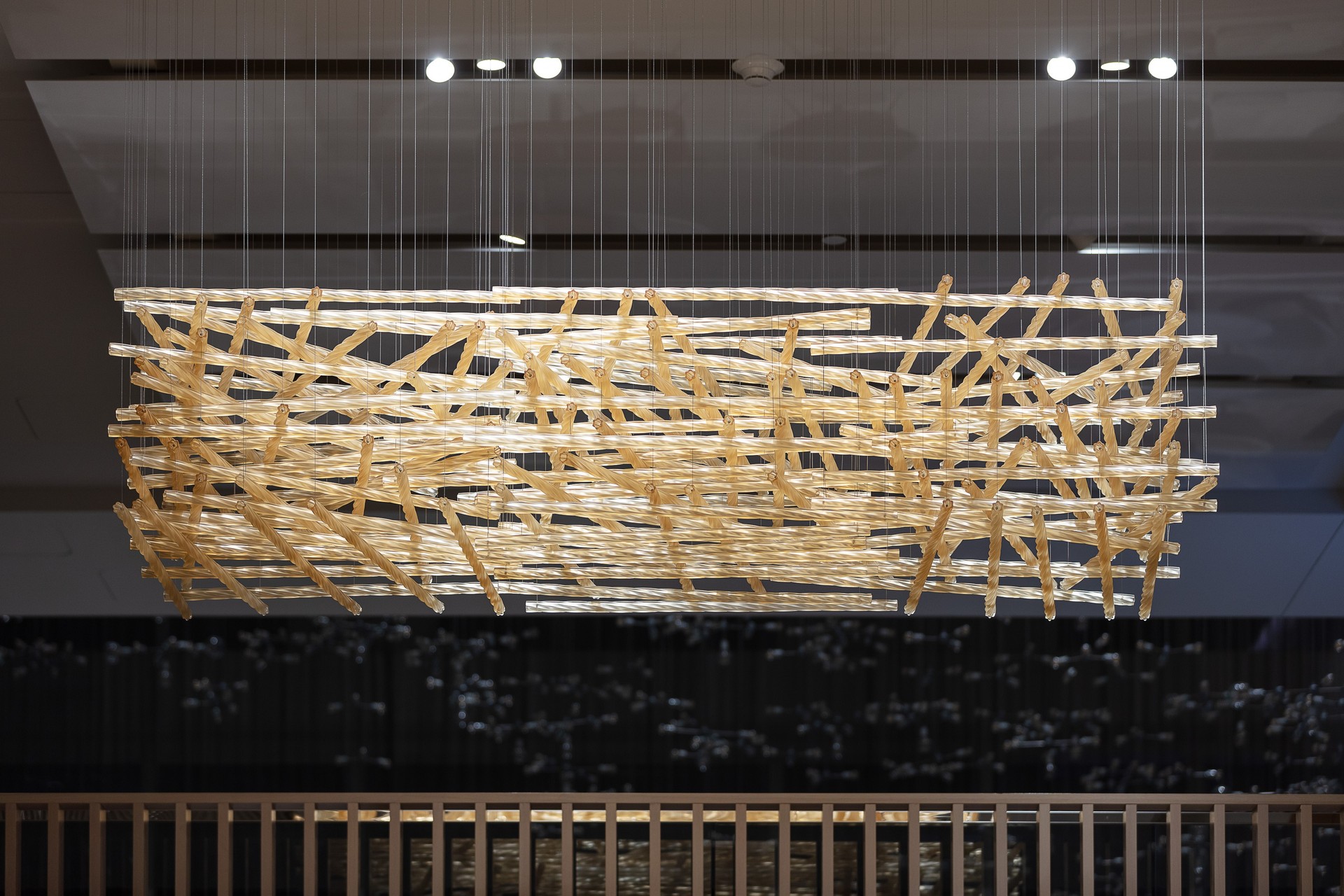 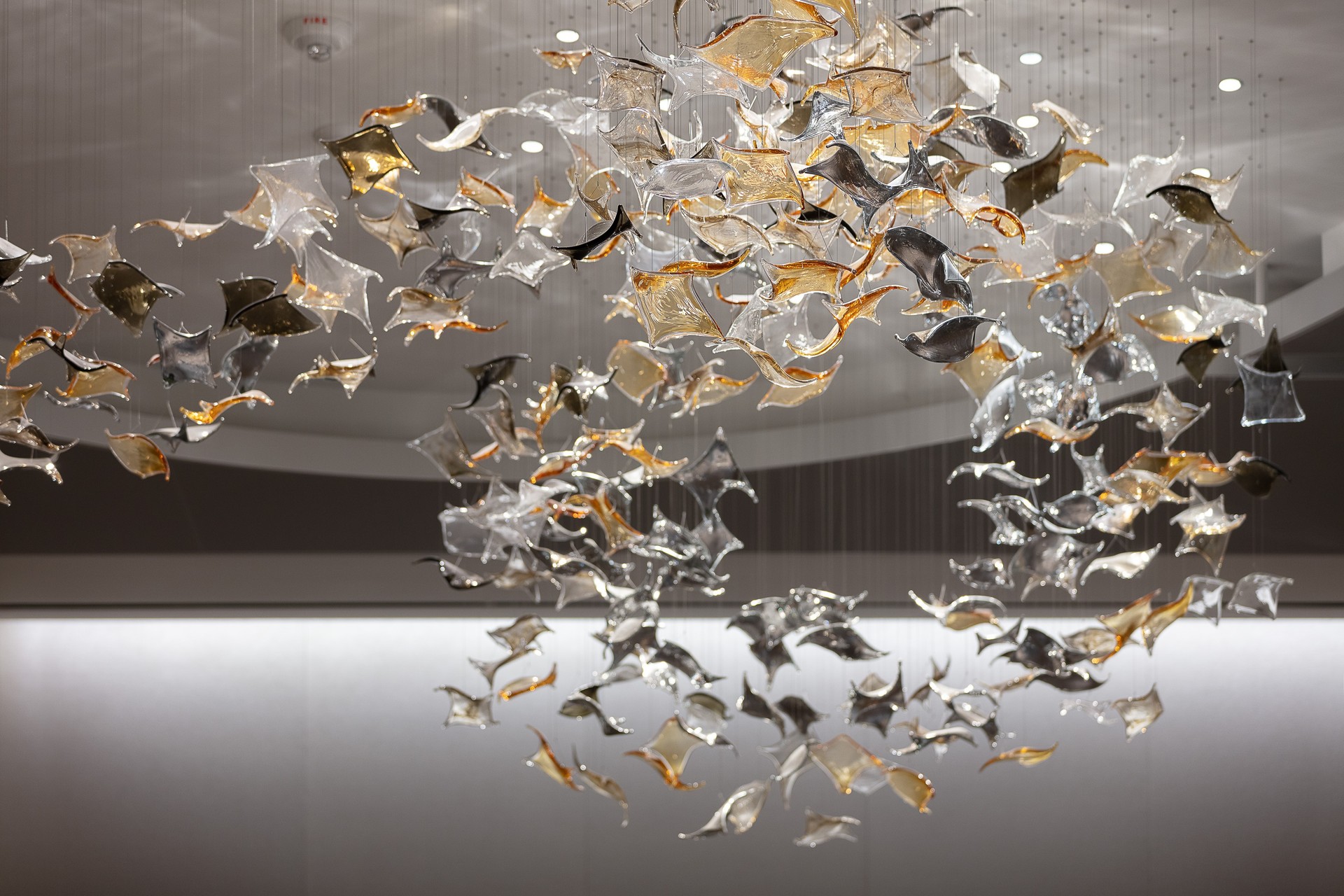