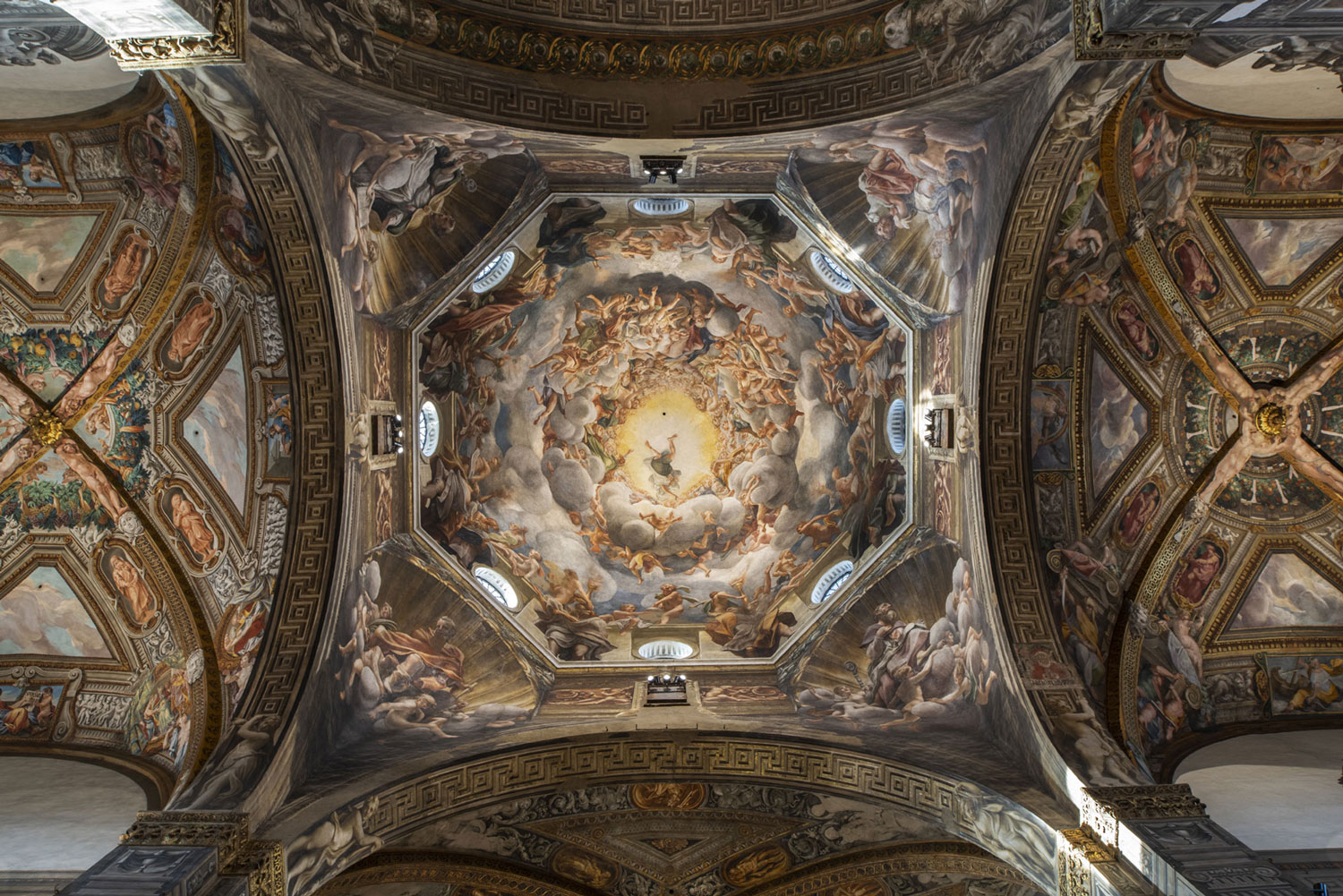 The Fabbriceria della Basilica della Cattedrale’s design for this project had been available for some time, but until recently there were not enough funds to implement it. However, when the Barilla family were contacted by the President of the Fabbriceria, they indicated their willingness to finance the project immediately.

Dedicated to the Assumption of the Virgin Mary, Parma Cathedral is one of the most representative Romanesque buildings of the period. The building was begun in 1059 and consecrated in 1106. The façade has a gable roof, three levels of loggias and three portals. The interiors have a three-nave and one transept structure with side chapels terminated with apses. In fact, Benedetto Antelami’s Deposition is walled into the transept. Antelami was one of the most important sculptors and architects straddling the 12 and 13th century, and one of the few Romanesque artists whose name we know.

iGuzzini luminaires help to create diffuse and homogeneous general lighting that allows the viewer to appreciate the cathedral’s grandiose structure and paintings as well as the tiniest details of its sculptures.

For the diffuse lighting in the central nave that features Lattanzio Gambara’s imposing fresco cycle depicting both the Life of Christ and episodes from the Old Testament, downward-pointing Front Light projectors, with a white finish, have been mounted on the railings of the women’s gallery.

Front Light projectors have been used throughout the cathedral with the complete range of optics available: from wide flood to spot optics.

The dome is decorated with one of the 16th century’s greatest masterpieces of Italian art: Correggio’s fresco of the Assumption of the Virgin, surrounded by apostles, youths and angels. The figures are depicted in a vortex that lifts them up into a rift in the sky in an illusionistic manner that employs the foreshortening technique which became common in major baroque paintings in the following century. Criss-crossing beams of light emitted by Front Light projectors fitted with a 32° optic illuminate the dome in a complete and homogeneous way.

To light the hexagonal and completely frescoed Valeri Chapel, on the other hand, Palco projectors have been fitted on the iron railings that guard the entrance to the Chapel. In several points, this frontal illumination is combined with Underscore light lines and Woody projectors.

In the crypt, to emphasize the cross-shaped vaults and dense forest of columns (which, it is claimed, were taken from the ruins of the ancient Roman city), Palco LV projectors with wide flood optics and minimum dimensions (ø37) have been mounted on the capitals. Overall, this project reduces energy consumption drastically and lessens the visual impact of the old traditional lamp projectors that were used previously. 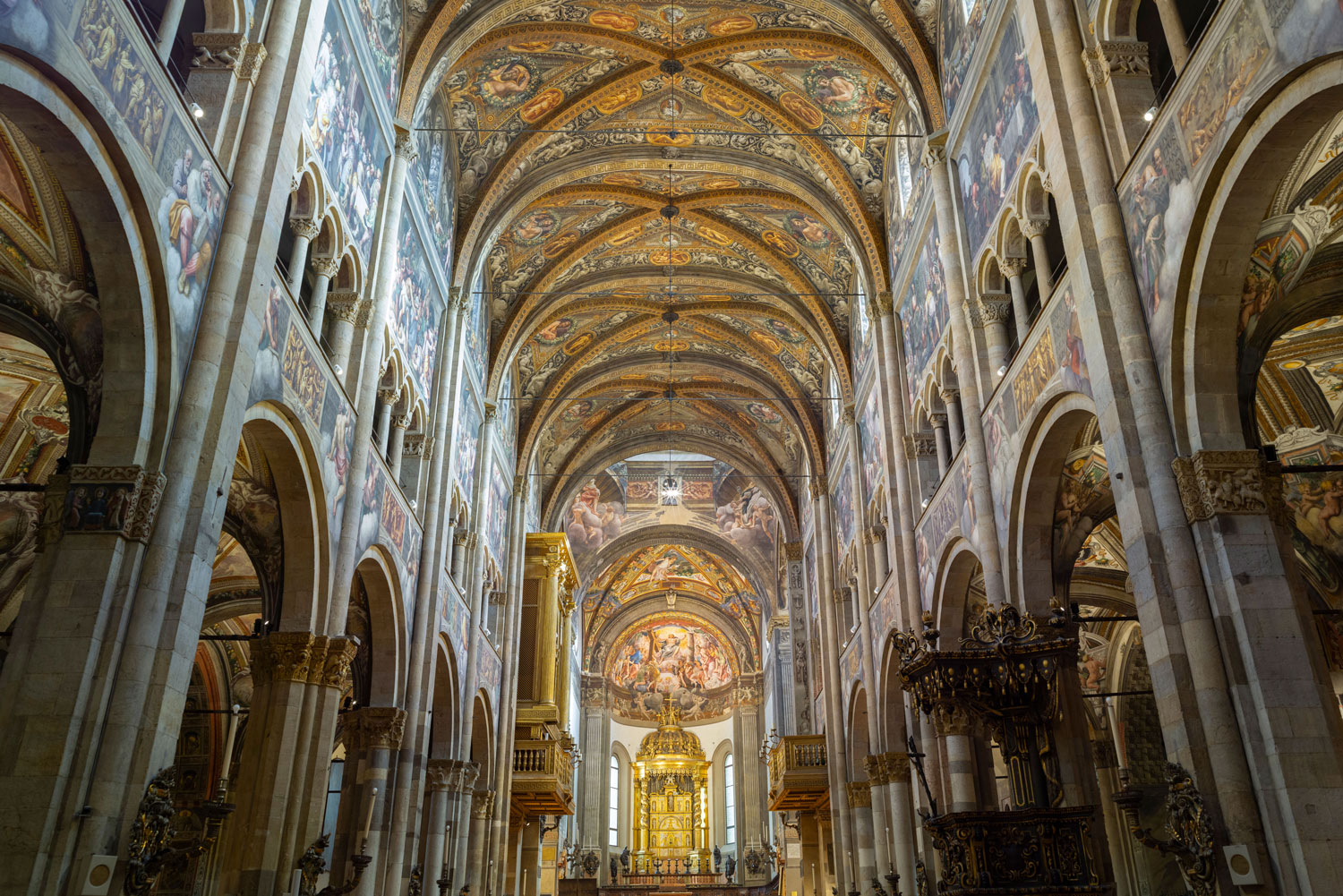 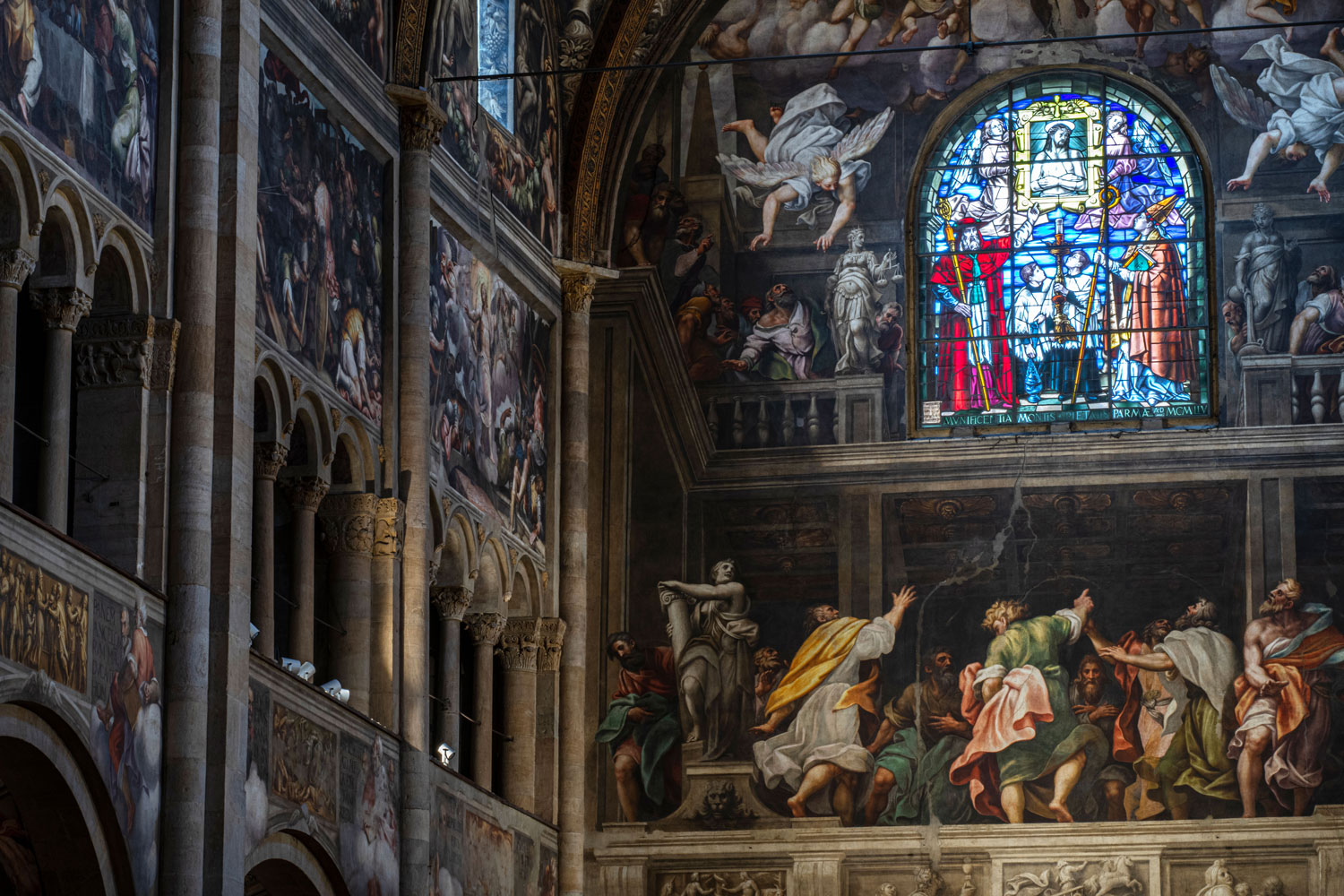 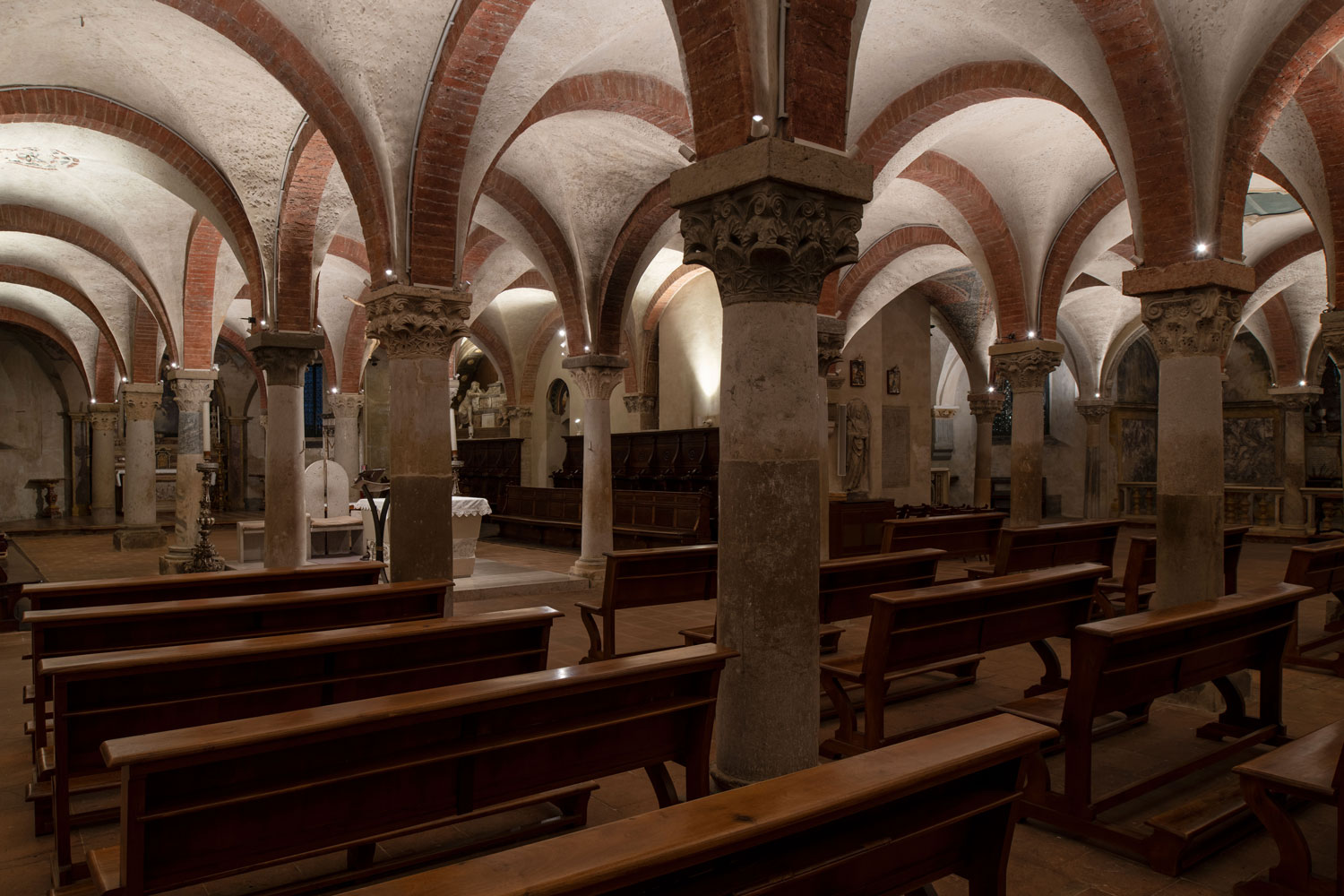 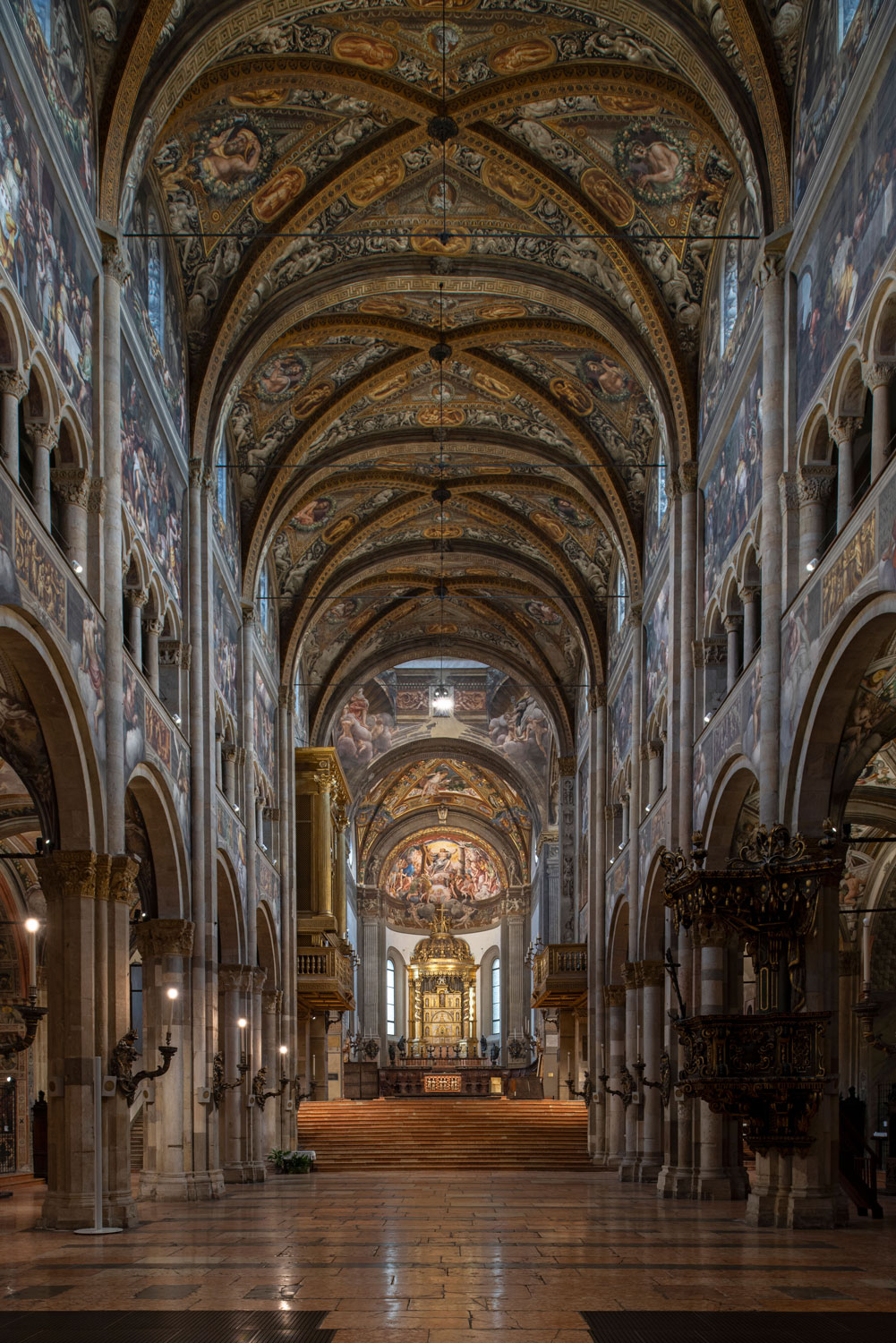