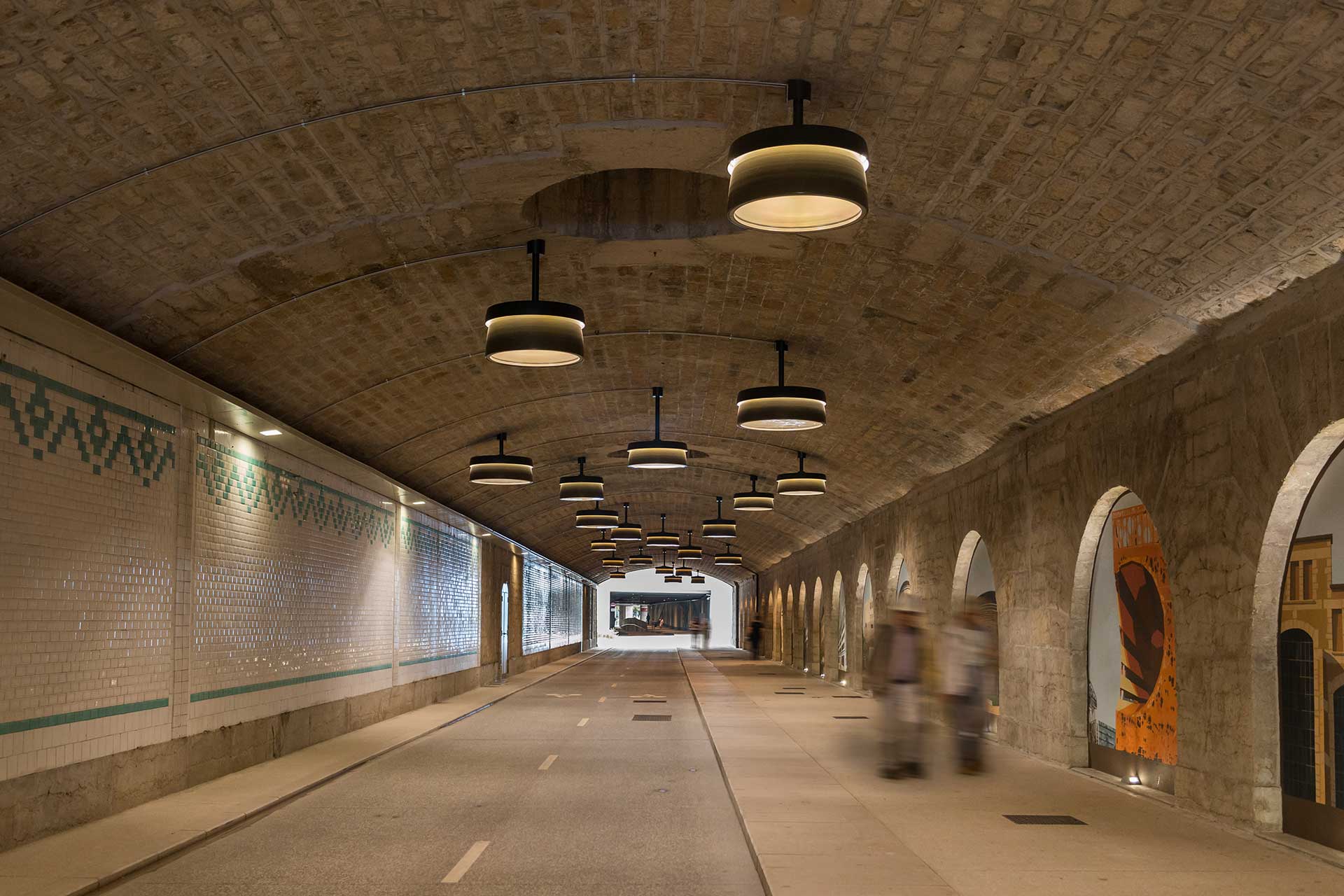 Lyon, France’s third largest city, is renowned for its gastronomy, secret passageways and emblematic Festival of Light which illuminates the city for four days every year in December.

The Perrache district in the centre of the peninsula is known for its historic train station which is a critical connection point for the local community as it links the metropolis to many national and international cities. Strategically placed between the north and south of the city, on a 6-metre-high embankment, the station has recently been redeveloped to make it more accessible.

As part of the project, a vaulted passage under the station, connecting Place des Archives to Place Carnot was opened up to create an underground passage for pedestrians and cyclists and provide a gateway to the south of the city. Formerly used by cars, it was redesigned to include a 2 way 4-metre wide bike path.

The lighting designer Marc Aurel from the Aurel Design Urbain agency was commissioned by Atelier Ruelle, the landscape design agency, to light this passage.

Conscious that an underground passage could create a feeling of insecurity amongst some passengers, it was critical for Marc Aurel to create a space where residents and tourists would feel safe, comfortable and completely at ease. His idea was to use light to “make a luxurious and sophisticated interior space”.

Schréder SIGNATURE took up the challenge of transforming this vision into reality by developing large-scale luminaires that could be installed on 4 to 6 metre high poles or suspended from the vaulted ceiling.

Designing urban spaces for people goes beyond practical considerations. In addition to creating a safe passage, the luminaires deliver lighting effects to give the space a welcoming feeling. This double lighting effect was achieved by integrating:

- a central light source that directs the light downwards, illuminating the interior surface of the lampshade and providing the necessary uniform levels on the ground to guide people

- LEDs into the superior outer ring, illuminating the exterior surface of the lampshade and creating lighting effects that can be changed in intensity.

The pendant versions of the luminaires inside the passageway enhance the ambiance by creating small lighting effects on the ground.

To achieve the desired light atmosphere conceived by Marc Aurel, a large number of luminaires were to be installed in the centre of the passageway, with the fixtures dispersed more and more as people move to the entrances. To enhance the chandelier effect, 3 different sizes of luminaires were to be installed and at different heights. This configuration would animate the vaulted ceiling and reduce the impression of travelling through a tunnel.

The lampshades are in different colours, like iridescent green or bronze, rarely used in public spaces to enhance the elegance and passenger experience.


A challenge on many levels

With 3 different sizes of luminaires needed, with a span of between 700 and 1,000mm, it was clear that this would be a challenge of many levels; structural, technical and photometrical.

Robust quality materials were needed. The body is composed of 3 sheets of aluminum that bring a sense of quality and high-end finish. The body integrates the two protectors made from polycarbonate, shielding them. It is vital that the polycarbonate remains smooth and is not deformed by any potential vibrations or changes in temperature as it has to ensure a uniform lighting with the same colour temperature and efficiency over time. Our teams delivered a luminaire tailored to all the project needs.

As maintenance would be a further challenge in this environment, we designed the luminaire so that the optical unit could be easily removed, implementing the principles of circular economy. We also developed optical replacement kits that can be simply integrated to reduce time and costs, without compromising the design.

Five light scenarios punctuate the ambience of the passage throughout the day and night. With each change in scenario, the intensity and the direction of the light bring a new perspective to the experience of the space.

Thanks to this redevelopment, this passage has a new lease of life. It has created a welcoming environment with a strong visual identity, improving access for passengers and encouraging them to adopt a more active mobility. 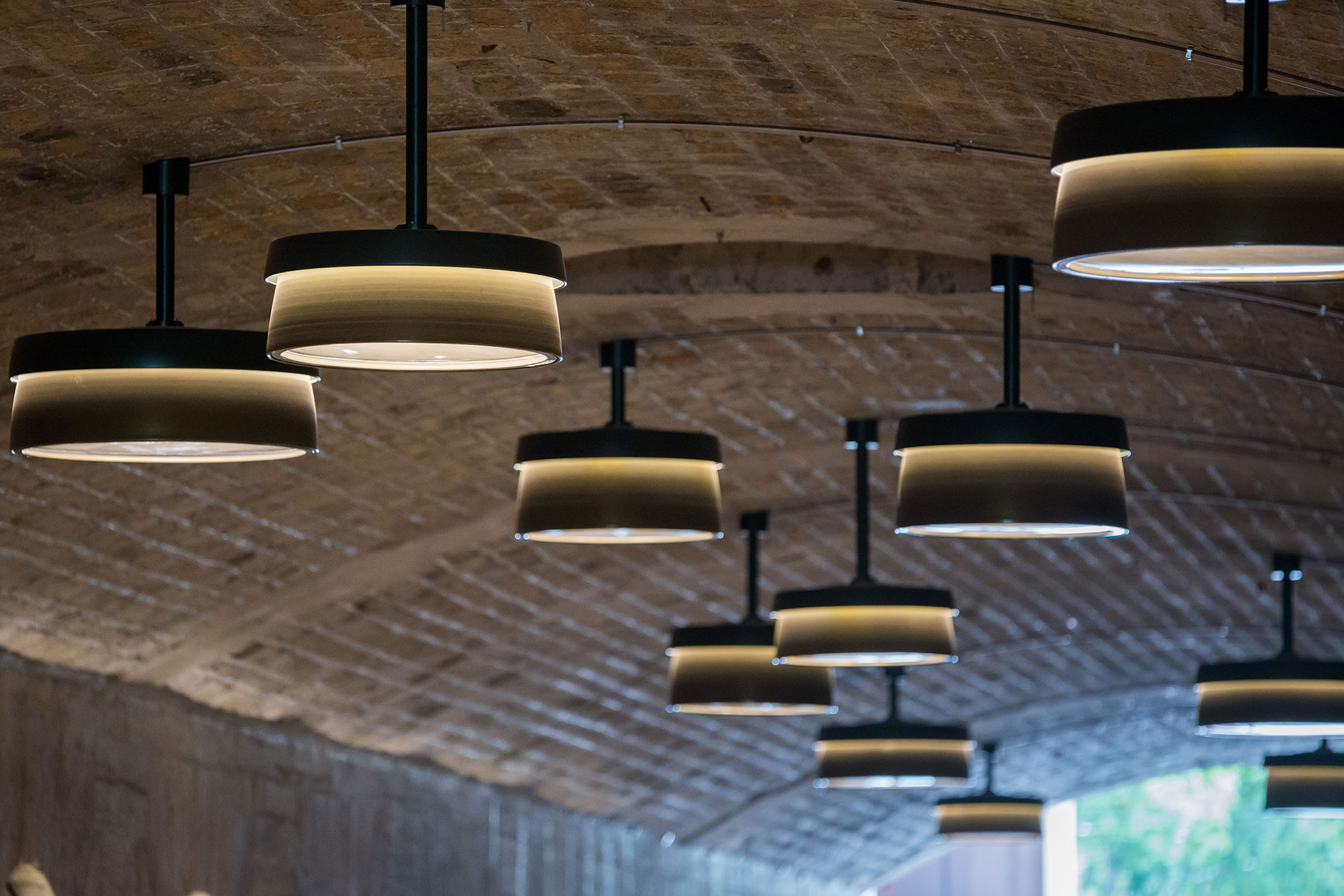 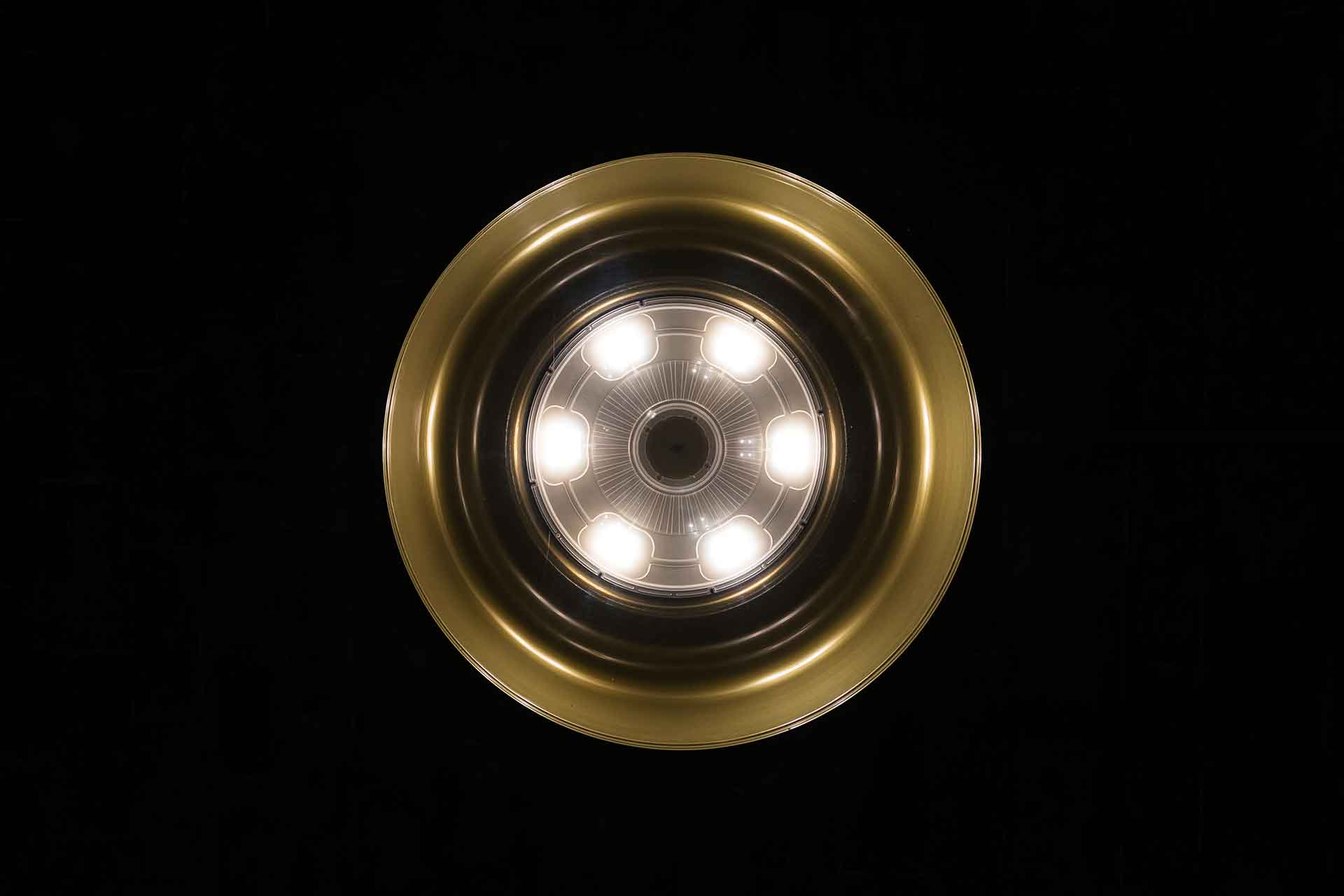 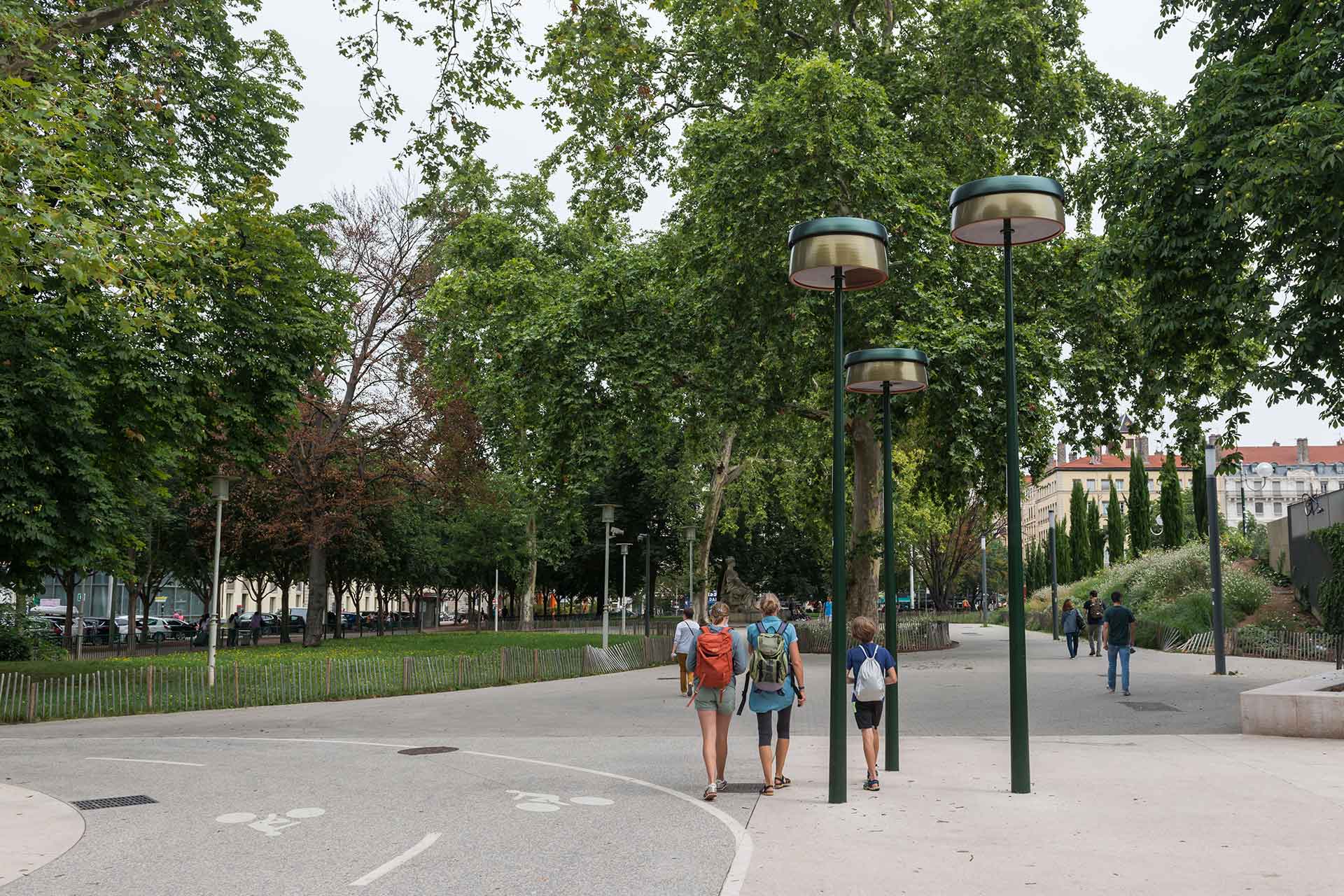 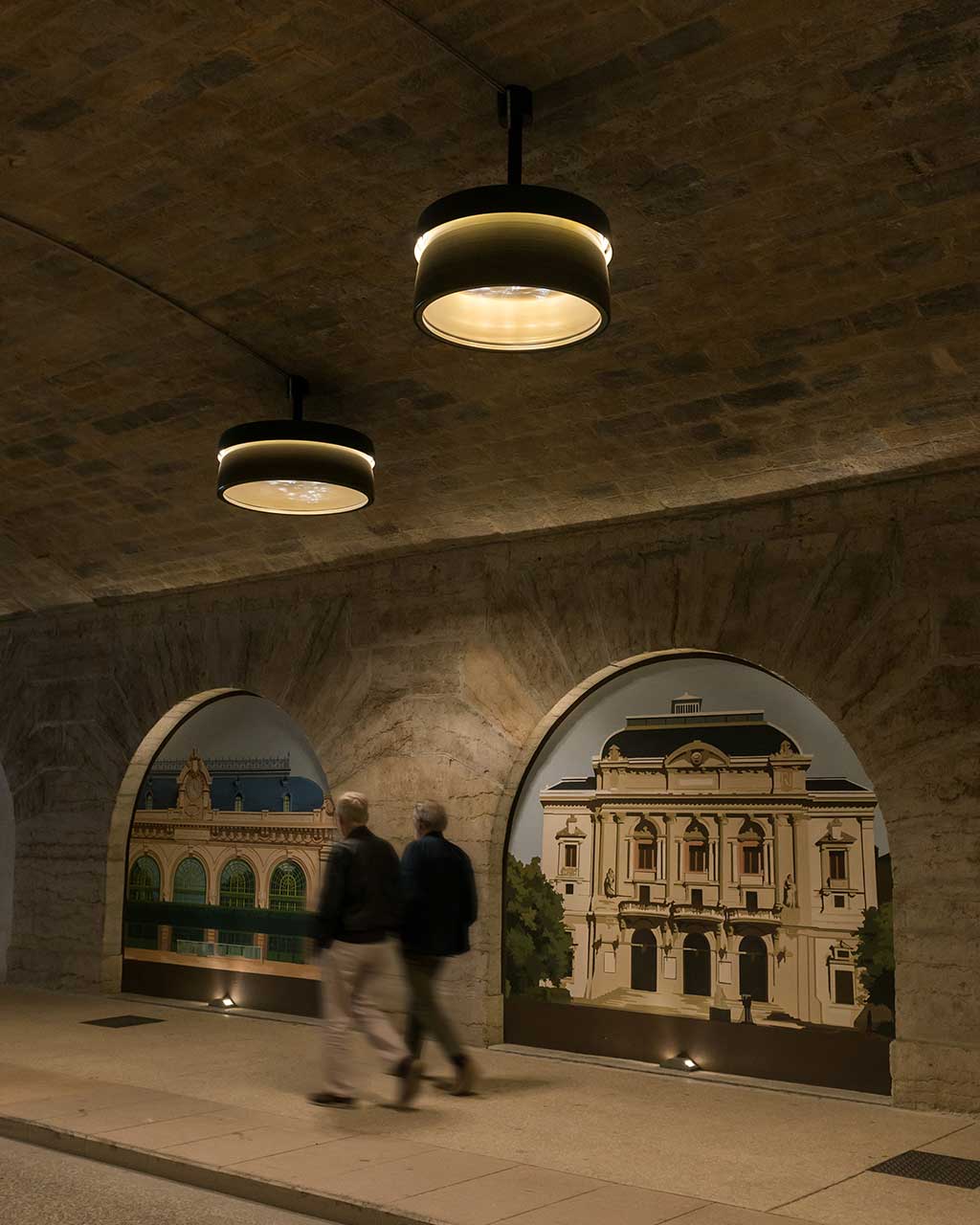