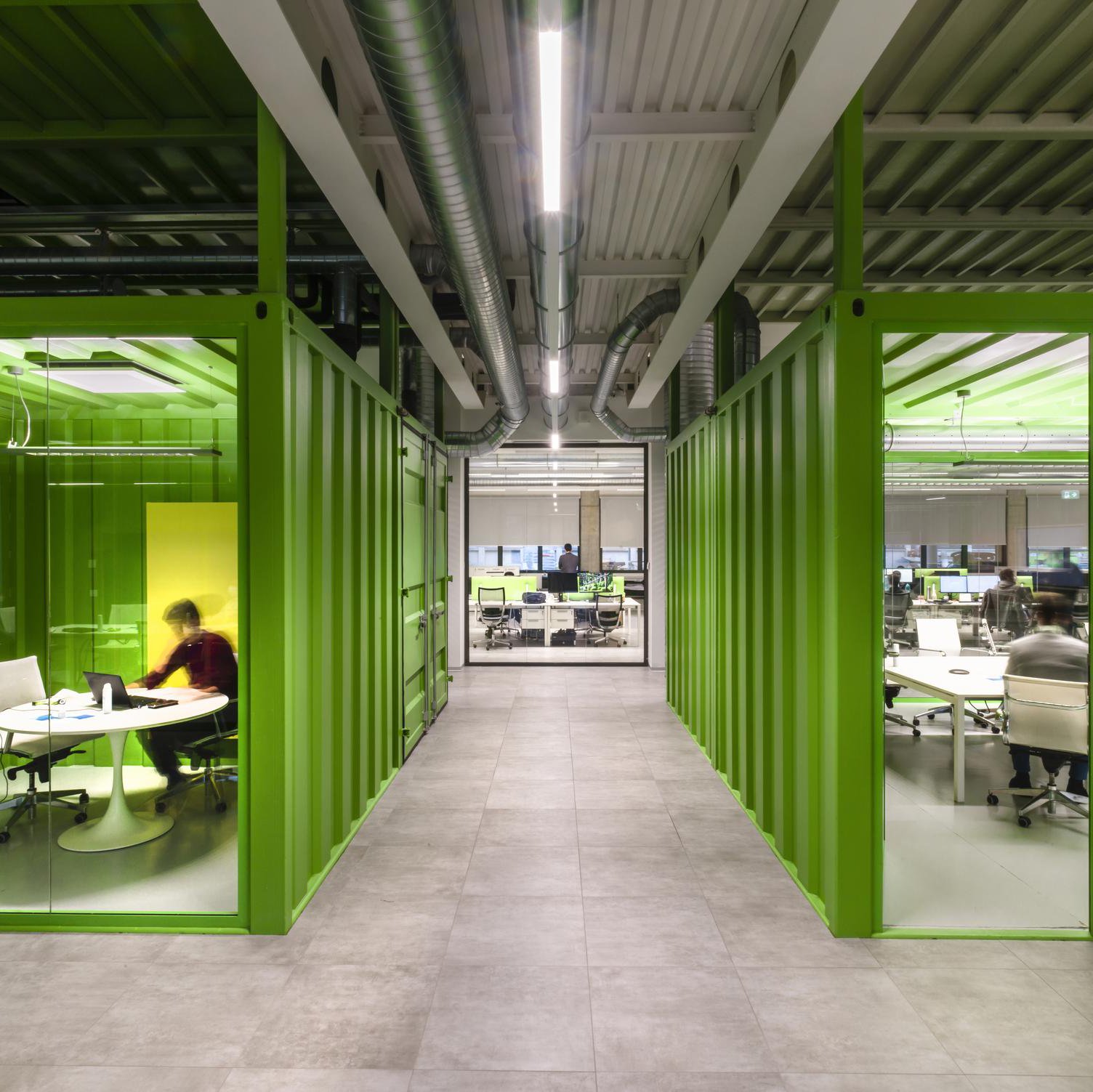 DALMINE, ITALY
Serioplast is a global manufacturer of rigid plastic packaging for the biggest multinational brands in the FMCG market. It was founded in 1974 and since then has been active in the FMCG (fast moving consumer goods) industry, in the home care, personal care and food&beverage sectors. Its customers include Unilever, P&G, Henkel and L'Oréal, to name but a few. As part of the Old Mill Holding group, it has global-level production in 30 manufacturing facilities in 14 countries around the world (Italy, Egypt, France, Pakistan, Poland, Russia, Slovenia, Spain, South Africa, Turkey, Tunisia, Hungary, United States and Australia), and has a constantly growing turnover.

This exponential development has led to the design and construction of the new Serioplast Headquarters in Seriate, where one of the most important companies in the Bergamo area, Frattini, once stood. A choice that encapsulates a great sense of revival for an area that experienced an age of considerable growth in the twentieth century, as well as a great sense of pride and hope of regrowth, breathing new life into the industrial area of Bergamo that had long been abandoned and neglected. A building project that has been defined as being in the public interest because, in addition to the important redevelopment of the entire urban area, it not only restores value to the historical industrial memory of the area, but also provides new interesting employment and development opportunities for the territory.

The new Serioplast headquarters, consisting of the central office building and adjacent production units, has developed an integrated project based on the latest strategies of sustainability, functionality, energy saving and maximum efficiency. It fully represents the company's own principles, respecting the environment and natural resources, choosing alternative energy sources and not wasting raw materials, at the same time protecting the well-being of those who work in the facility. Serioplast's project managers managed the design from the outset, based on the idea of well-being for the people who work there, favouring ergonomic solutions and collaborative spaces, focusing attention on the smallest details. For these reasons, and to preserve the area's identity and industrial history, the architectural design was inspired by an industrial style, deliberately leaving the structures and mechanical systems exposed, preferring simple finishes, essential colours with a company feel, and open, communicating spaces. The central hub of the HQ is characterised by an interplay of projecting containers housing meeting rooms and echoing the distinctive features of the company's production plants. Colour-coded containers interconnected by raised walkways create a very bright, welcoming and highly dynamic environment.

An intelligent and efficient lighting system was needed to support such a large-scale, state-of-the-art project. Serioplast chose to rely on Zumtobel Group's expertise, from detailed planning to final implementation. The close synergy between the client's project managers, the electrical designer E.M.S. Engineering Srl and Zumtobel Group's in-house design office collaborated successfully in creating the ideal lighting system to meet the diverse requirements of the new Serioplast headquarters.

The lighting design was studied and developed as an intrinsic part of the architectural project, so that it could be fully integrated with the industrial concept and could also be modelled on the basis of the choices and needs arising during construction. This was made possible by a series of meetings between company representatives, the designer and Zumtobel Group, starting with the initial evaluation of the luminaires and ending with on-site inspections after the entire system had been installed.

A complex and very articulated lighting project was developed for all areas of the new Serioplast headquarters, from the production areas to the office building, from the architectural lighting on the façade to the study of emergency lighting and management systems.

CRAFT industrial reflectors, differentiated by lumen package and optical aperture as required by the spaces, were installed in the large production and storage halls. The CRAFT LED luminaire is specially designed to cope with all industrial challenges, thanks to its extraordinary efficiency and precise, well-shielded light control. Its wide-beam optic provides the optimum conditions for concentrated work with homogeneous light distribution even in large halls, while its narrow-beam optic ensures efficient illumination of large shelving areas.

However, the beating heart of the project is the HQ office building. The luminaire that fully embraced the whole project was the TECTON, a continuous row lighting system that is already well known all over the world because it is extremely versatile and efficient, can be freely composed to perform any lighting function while maintaining a uniform design, and is also very light and easy to assemble. Developed for all the floors of the building, from the basement to the top floor, its industrial character manages to integrate perfectly between the ducts and the visible metal structures, blending discreetly and accurately into every environment.

It runs along the large open-space offices on all operating floors housing the TECTON MIREL, which with its lenticular optics, is able to provide outstanding comfort for even the most demanding visual tasks at workstations, with very small emission surfaces and minimum UGR values < 19.

This system is also developed along all transit areas and in secondary rooms by housing the TECTON C, an energy-efficient linear luminaire with "split" lens construction to reduce perceived glare, flanked by VIVO M TEC spotlights for spotlights in relaxation and meeting areas. In the most intricate passageways, such as raised walkways or full-height areas, these spotlights were combined with additional Vivo spotlights, but on an electrified track. They are mounted on the wall directly on the structural beams or on the overhanging floors, with well-calibrated beam openings to provide the right lighting even at the most complex interconnection. Similarly, ONZPO L electrified track spotlights of a larger size and lumen package have been provided for the highest installations, directly below the central shed roof of the building, to supplement the lighting of the passageways or green areas on the staggered levels.

The meeting rooms, built inside containers that seem to float in the building's central space, stand out from the rest of the lighting design with the elegant pendant luminaires with their minimalist design that can be fully customised. The micro-prism optic and organic shape of the reflector provide excellent light for any working environment, well shielded and without shadows, while the strong indirect component emitted in a wide Batwing beam is evenly distributed over the ceiling, framing the room in a pleasant atmosphere and enhancing the corporate colours of the containers.

The emergency lighting system for all the escape routes in the building and for the anti-panic areas completes the project. Dedicated luminaires integrated in the TECTON linear system such as RESCLITE PRO TEC in the various specific optics, as well as integrated CROSSIGN 160 P TEC pictograms indicate the escape routes, while retaining a unified system and design.

In addition to the practical lighting of the interiors, Zumtobel Group enhanced the project by studying the architectural lighting of the façades and all the areas outside the Serioplast office building. From the green area on the basement level, which has been enhanced by illuminated luminaires on the floor and minimalist ceiling lights under the canopy, to the flames of light that mark out the metal cladding strips of the façade by the installation of Plaza S7 spotlights with supernarrow optics, to the play of light on the large green terrace on the top floor with the SUPERSYSTEM Outdoor façade spotlights and their three fully adjustable pins.

The LITECOM Infinity Zumtobel is a particularly intelligent and intuitive lighting management system that allows the entire headquarters to be managed in preconfigured lighting scenarios according to the company's needs and visual tasks. Lighting when and where needed, through ED-SENS multi-sensors for detecting the presence of users and ED-EYE photo-sensors for quantifying the amount of daylight in the room, which are also integrated into the Tecton system, the undisputed star of the project.

Both Zumtobel Group and the client take a lot of pride and satisfaction in the lighting project, as the company's Site Manager confirms:

"Zumtobel products stand out for their quality, which you can see and feel when you experience the surroundings, at what I consider a fair price. The luminaires adapt to the natural light in the room, providing the correct amount of lux for people as they work while reducing energy wastage. The simple and essential design also fits very well in our context. At the end of the project, I can say I am happy with our excellent collaboration: they were there for us during the entire planning and modification stages. 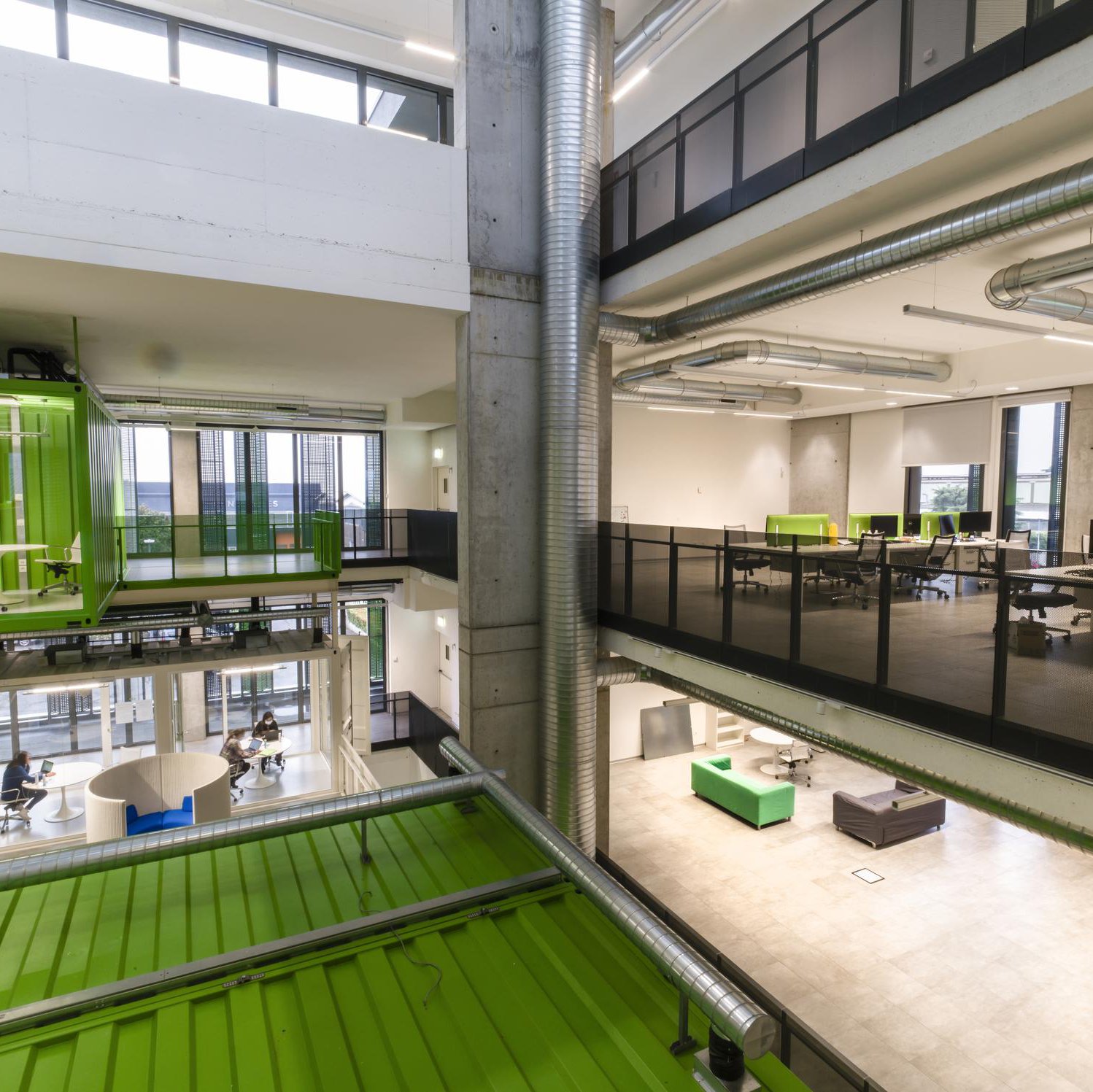 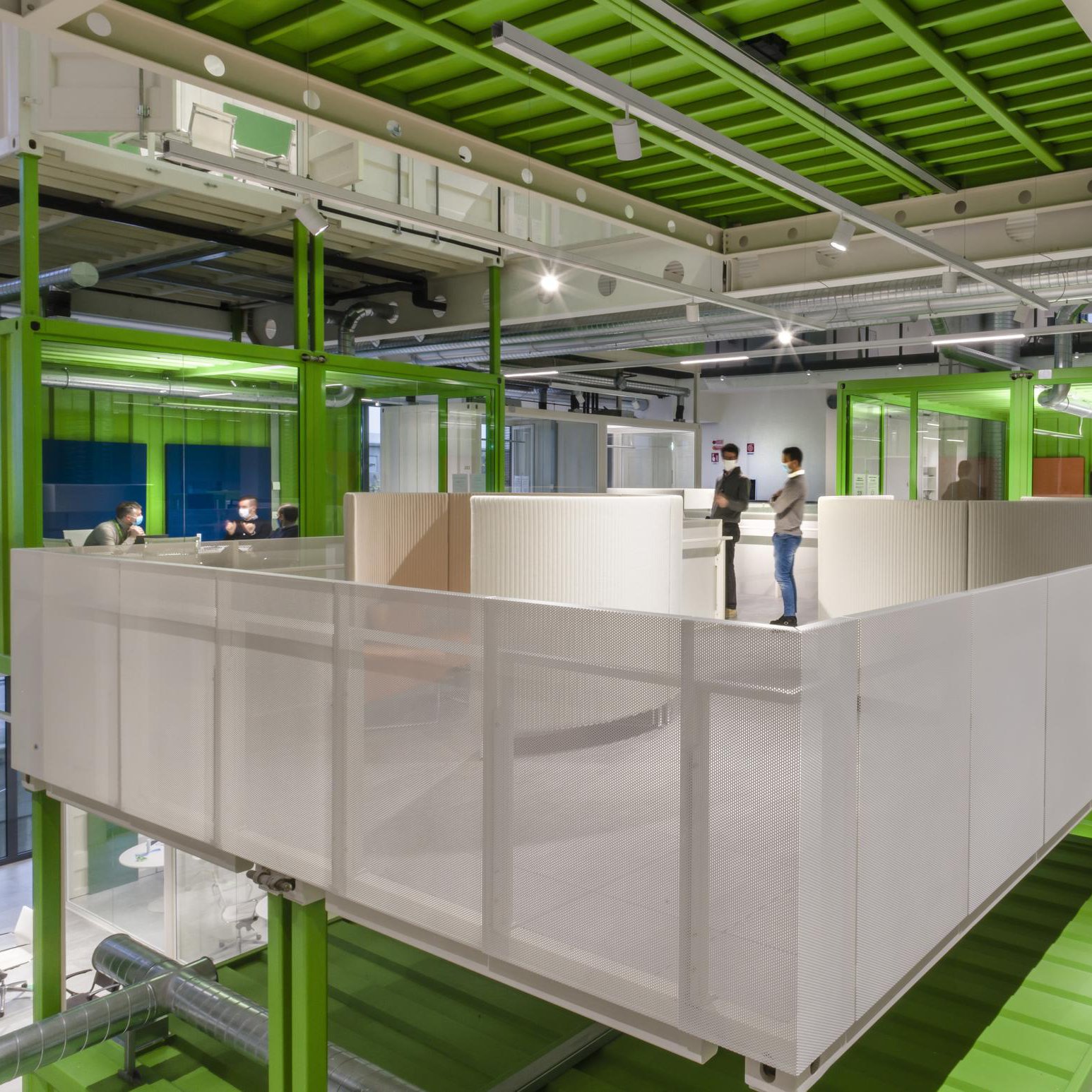 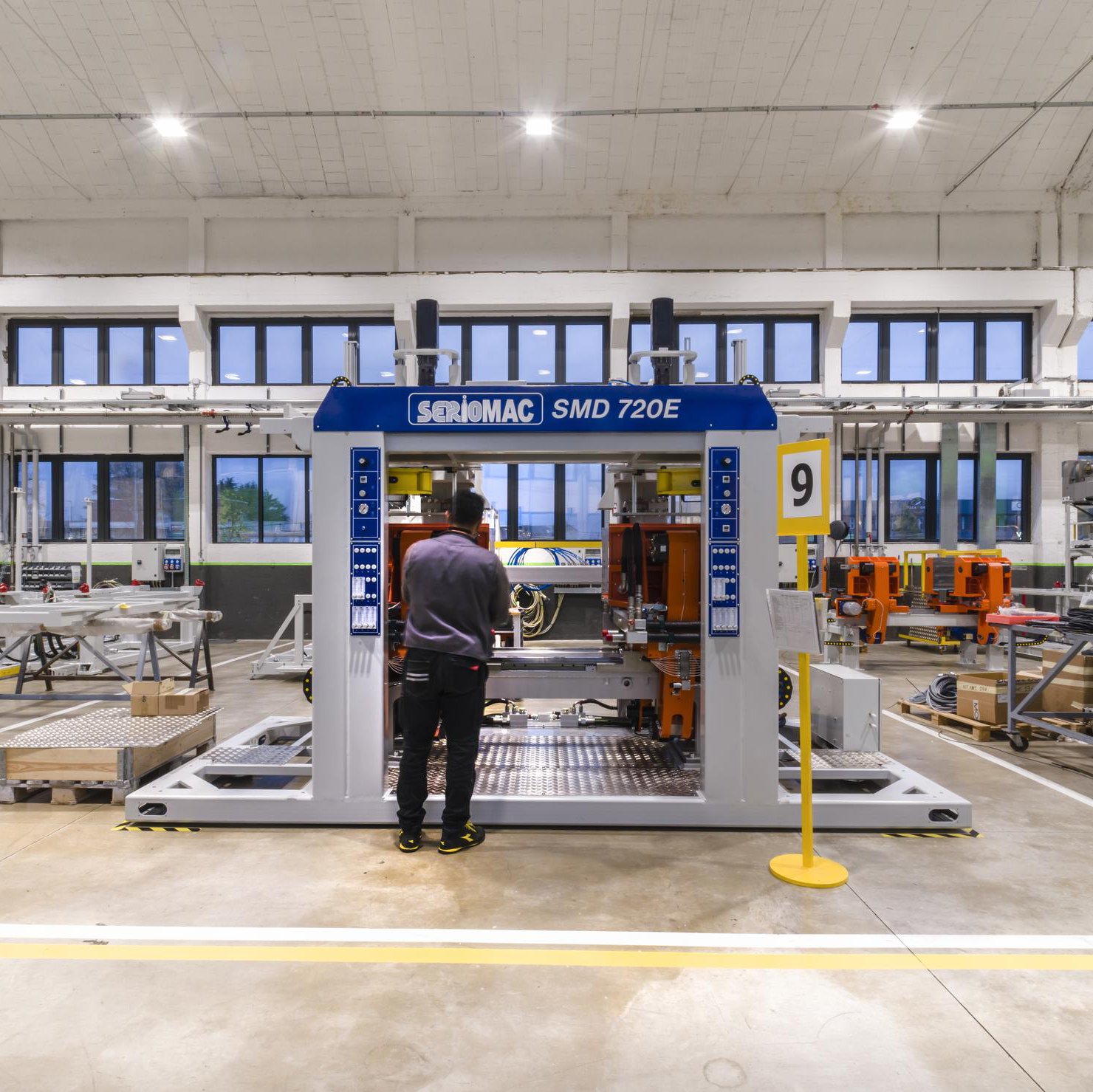 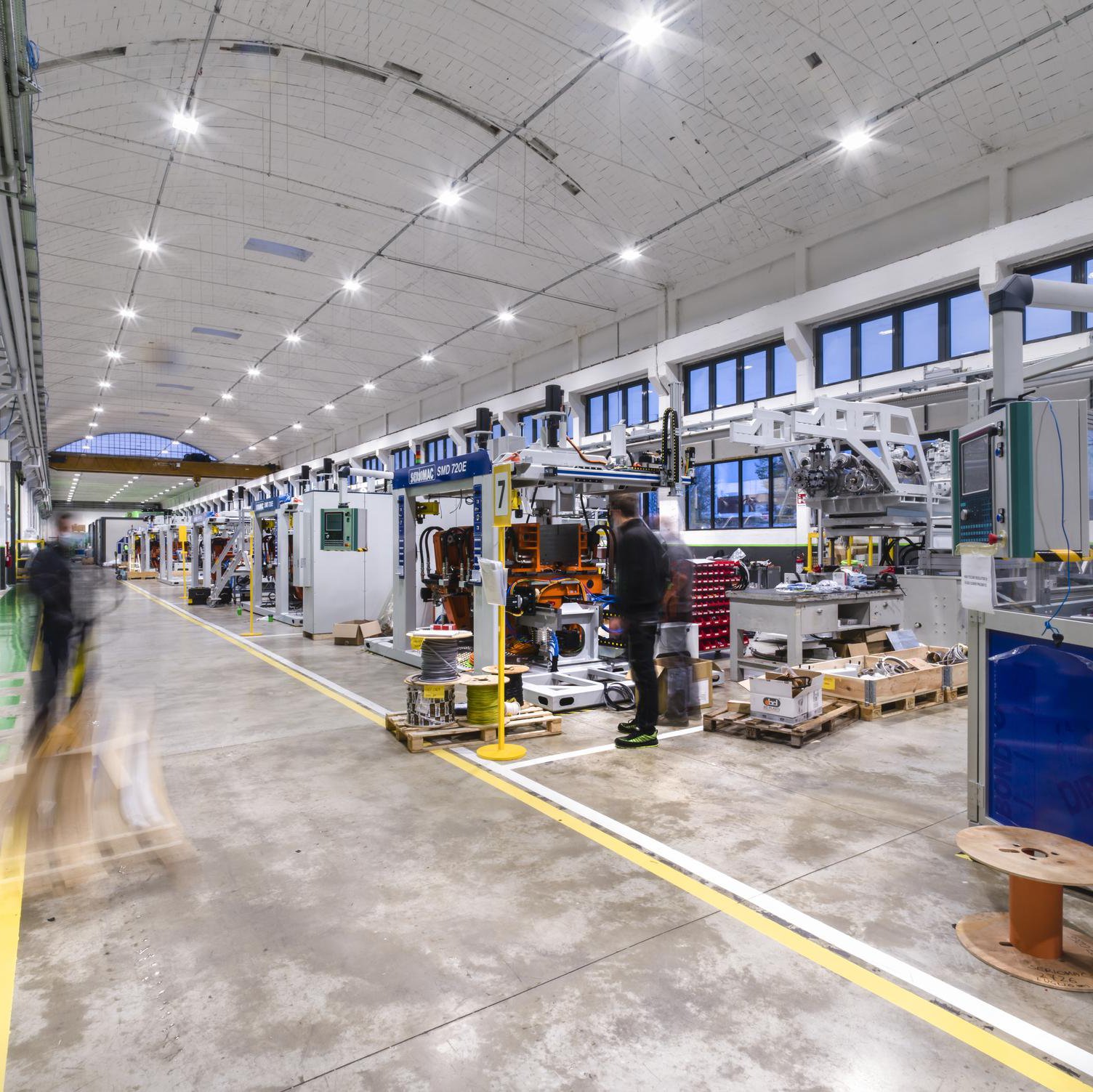