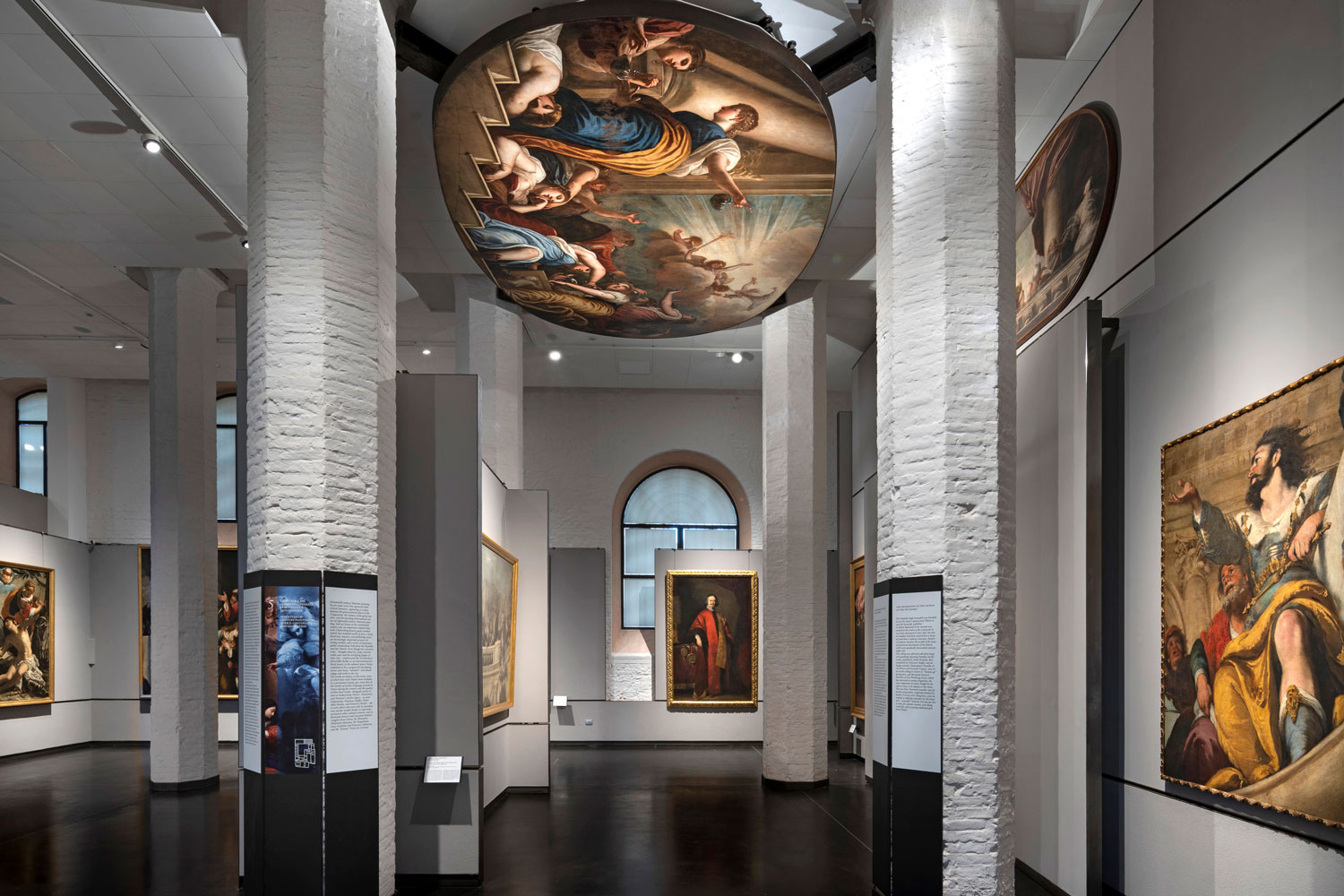 The Selva - Lazzari Rooms at the Gallerie dell’Accademia

Venice, Italy
From September 2021 onwards, the monumental Saloni Selva-Lazzari rooms on the ground floor of the Gallerie dell’Accademia Museum in Venice will display a unique exhibition of seventeenth and eighteenth-century Venetian and Veneto painting. This new layout follows the major restoration project, designed by Tobia Scarpa, supervised by the Director of Works Renata Codello and completed in 2013, that restructured the functional design of the entire ground floor of the museum.

This area now exhibits sixty-three works, some of which have never been exhibited before or, at least, not in their current glory as many of them have been specifically restored for this occasion. The masterpieces restored include Il Castigo dei Serpenti by Tiepolo, a canvas over 13 metres long from the Venetian church of Saints Cosma and Damiano and La Parabola delle Vergini Sagge e Stolte by Padovanino, presented to the public for the first time ever and returned to its original position on the ceiling.

The new layout covers a particularly important segment of seventeenth and eighteenth-century painting and completes the museum’s ground floor experience dedicated to the 1600s, 1700s and 1800s.

The two rooms are spacious, high environments (about 6.5 metres), with minimalist surfaces characterised by large columns between which partitions have been positioned that are open at the top, so they can house large canvases.

The false ceilings have been replaced and are now the perfect base for white ceiling-mounted tracks on which medium body ⌀ 156 mm View projectors have been installed. This luminaire was identified as the best solution for meeting the needs of flexibility required for future layouts.

The projectors have been used with all their optics: spot medium and flood, that are also interchangeable, as well as a series of accessories to create the most effective light emission for each individual painting.

The luminaires have built-in dimmers that have been regulated manually whereas the system is managed through a control system that functions with relays that operate the groups of luminaires.

The other important aspect is colour rendering, so the luminaires have a CRI of over 90, while the colour temperature for the whole space is 3000 K.

Because of the way certain works have been positioned, like Padovanino’s La Parabola delle Vergini Sagge e Stolte, relocated on the ceiling, La Parabola del Banchetto di Nozze by Bernardo Strozzi and Santa Caterina Si Rifiuta di Adorare gli Idoli by Sebastiano Mazzoni, the type and positioning of the luminaires used has had to be changed. In this case, Palco LV projectors were chosen for their extremely compact size and installed on tracks on top of the partitions to obtain a criss-cross of light beams that allows the works to be viewed even in areas without excessive luminance. 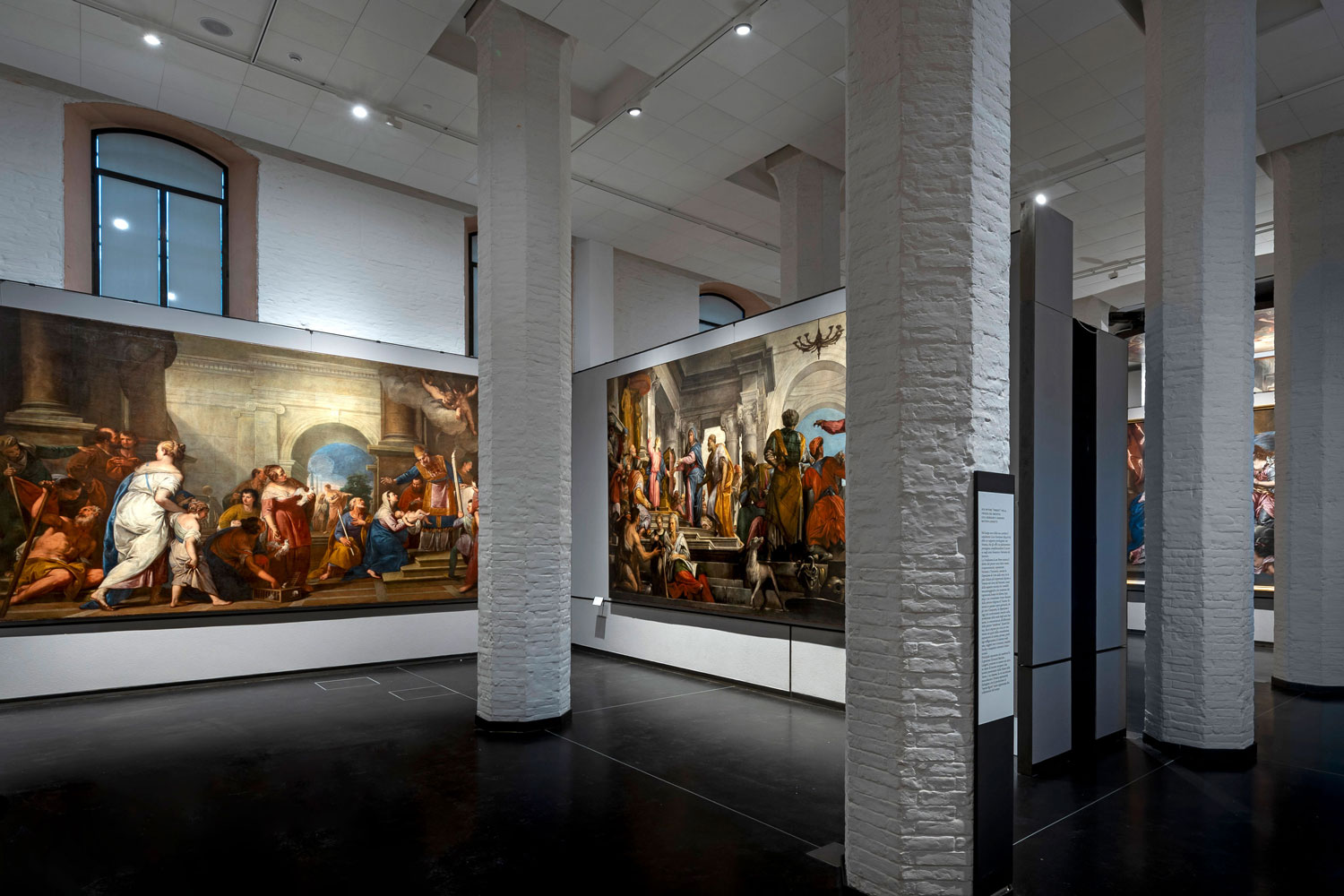 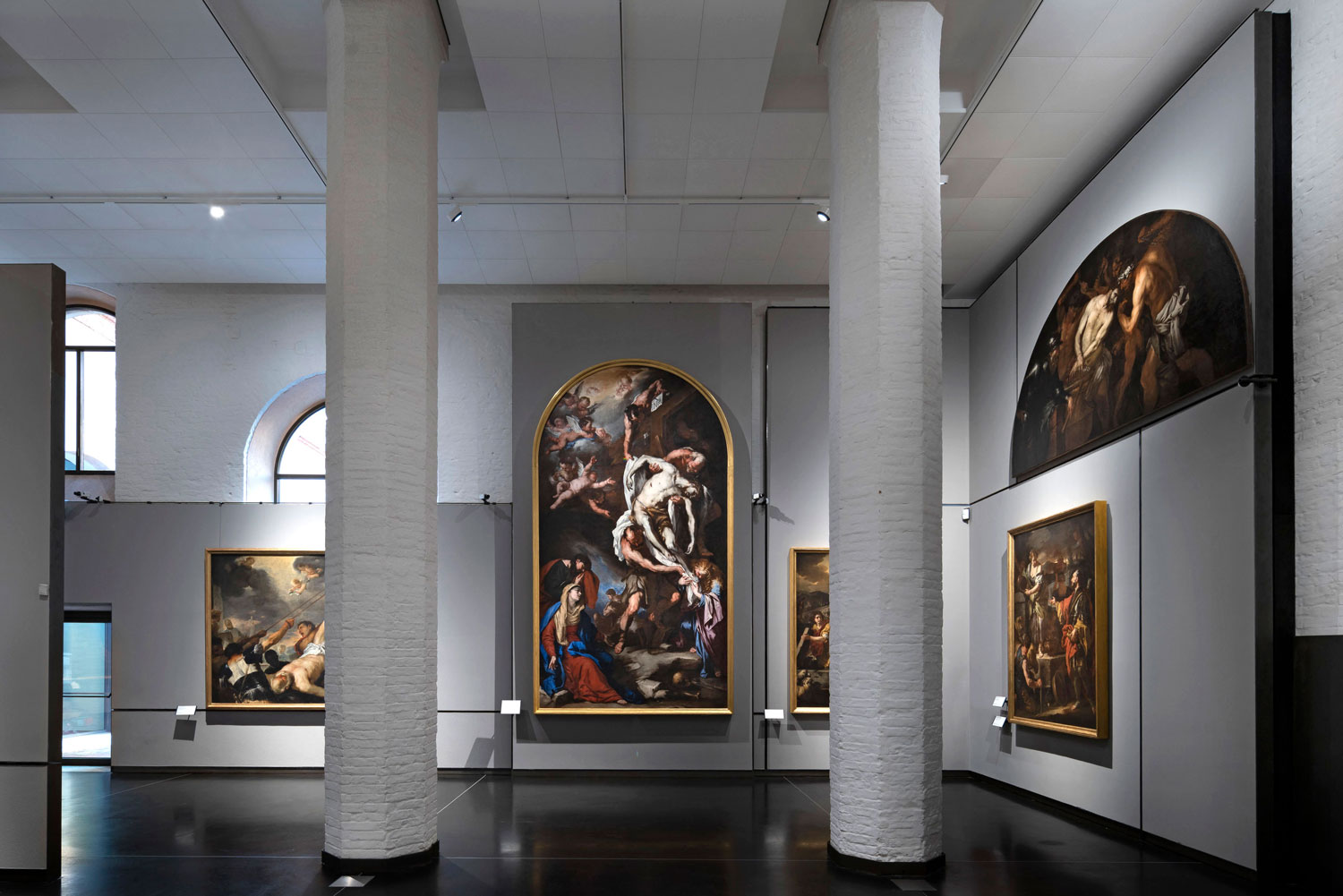 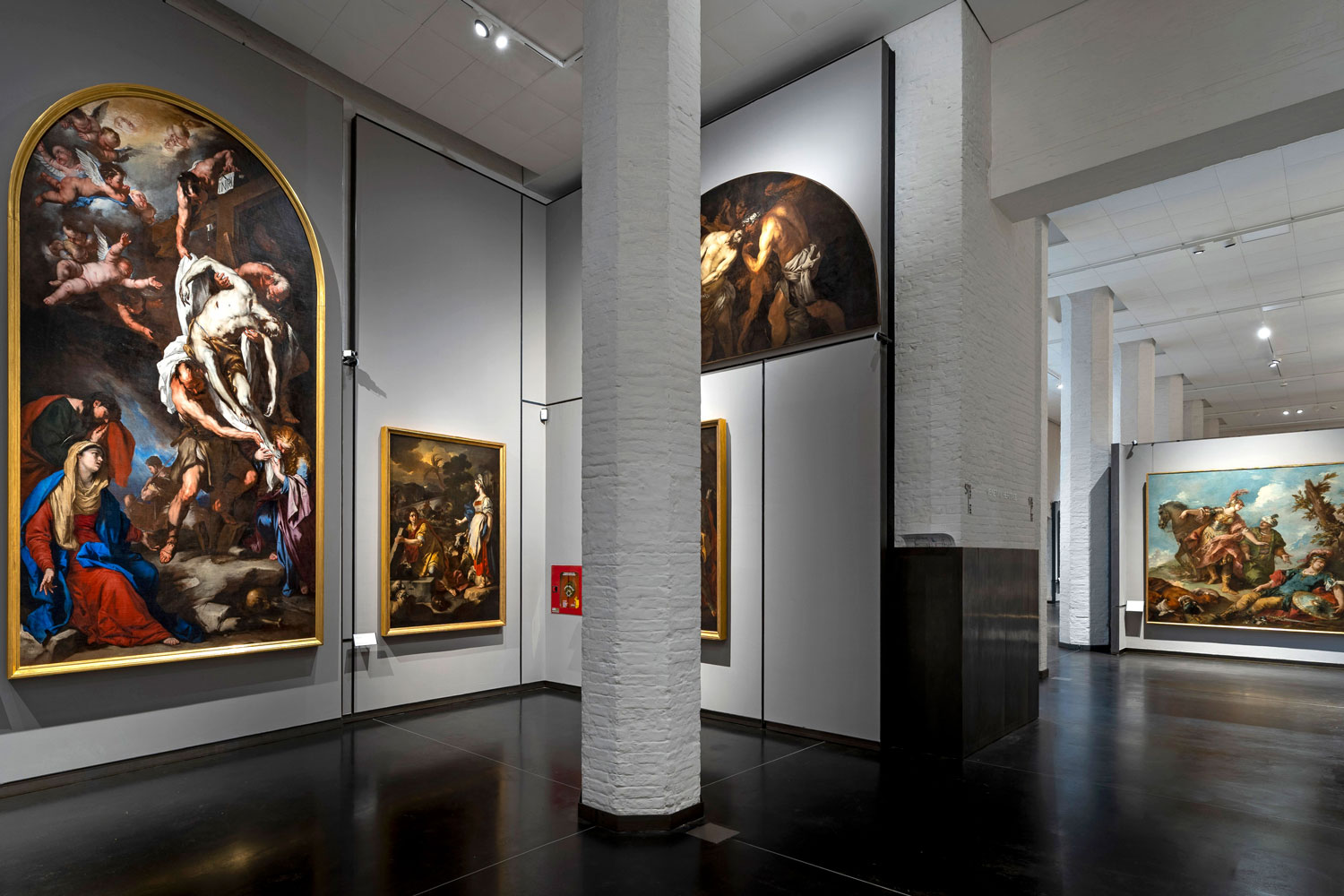 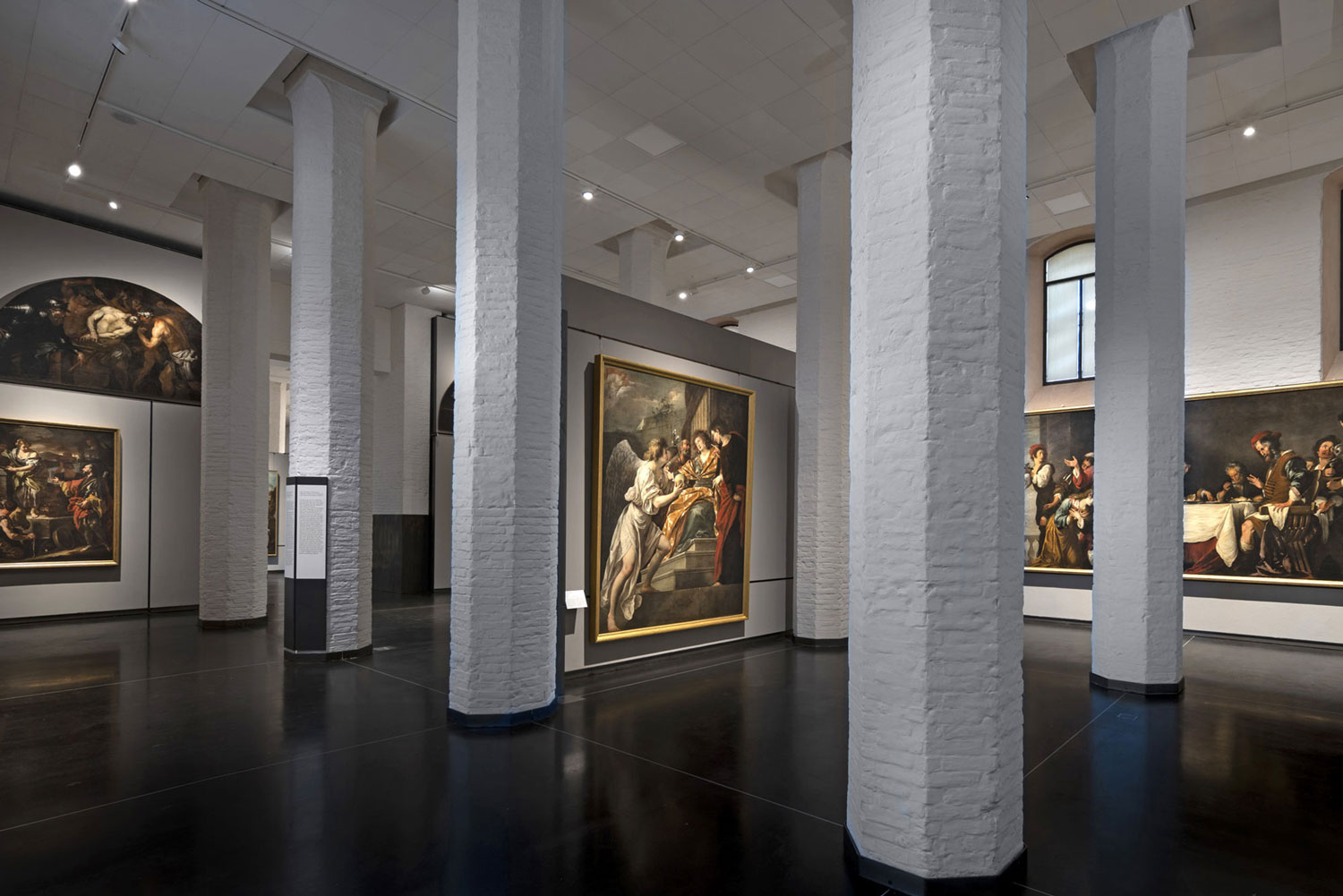