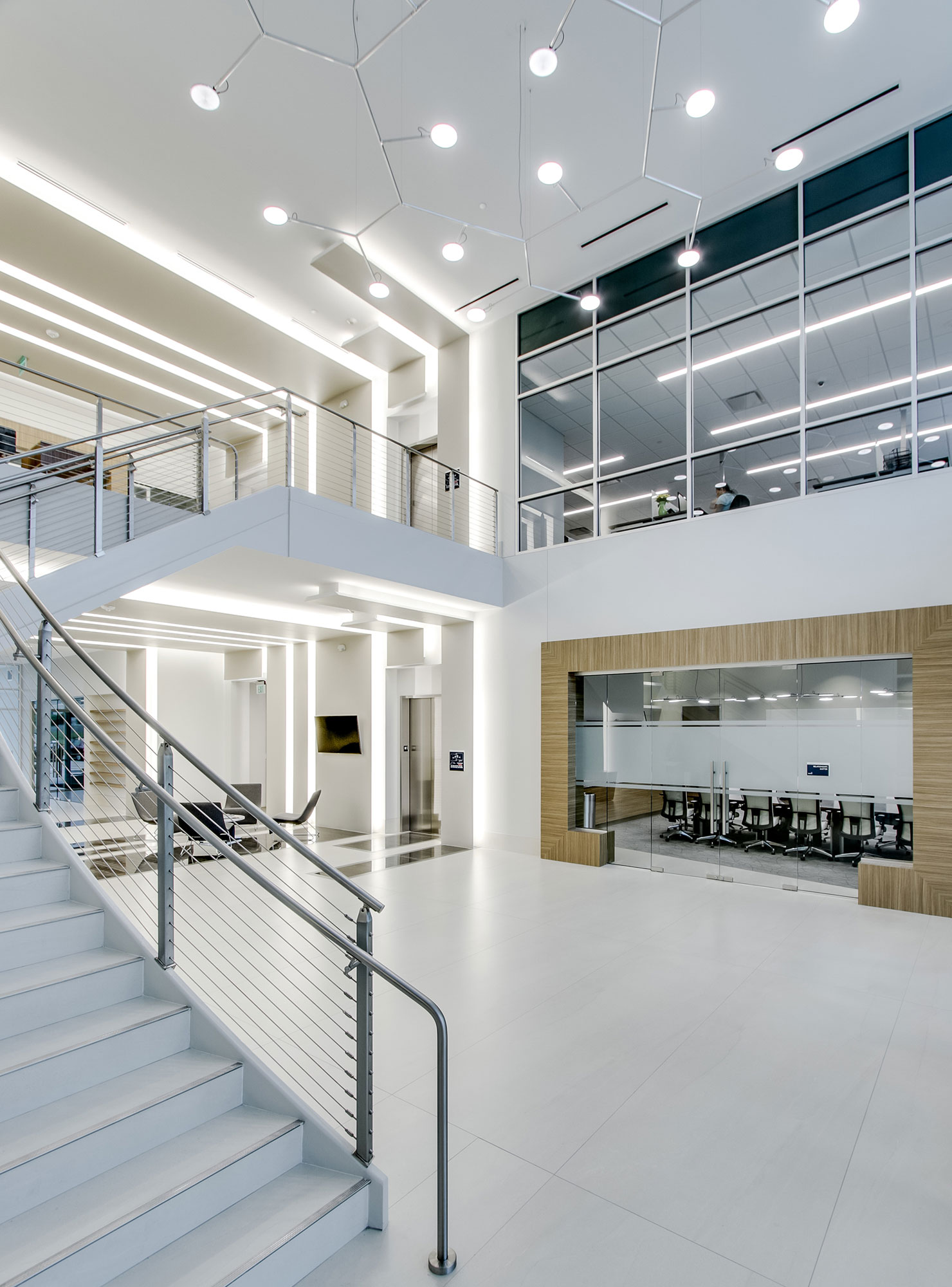 Within this area, the architectsof the O’Brien team from Dallas developed the Town Square II building. This is characterised by modern architecture, which is also reflected in the harmonious interior design with subtle, fresh color schemes and lighting coordinated with the clean lines.

In the object mentioned here, the AVVENI PENDANT 18 luminaire already sets expansive accents in the entrance area. With 18 individually adjustable light heads and a size of 442 x 438 cm, the branched luminaire becomes a striking lighting object that harmonises perfectly with the stylistic elements of the room thanks to its polished surface.

In the adjacent meeting room, three AVVENI PENDANT 6 pendant luminaires above the large rectangular meeting table provide homogeneous table illumination. The individual luminaire heads of this branched luminaire structure of AVVENI PENDANT 6, which appears round as a whole, can all be individually rotated. Also, the alignment of the heads in the direction of the ceiling is possible, by this quick change to indirect lighting, the lighting effect and mood can be changed in a simple way. The pendant canopy was chosen as the suspension type for AVVENI PENDANT 6, which also allows the luminaires to be suspended from great room heights simply and elegantly.

The AVVENI luminaire series opens up new horizons in the planning and realisation of complex lighting solutions, e.g. in offices and shops. Due to the strict geometry and modularity of the luminaires, identical or different elements can be combined in groups to create a harmonious overall appearance. In combination with the technical lighting possibilities and the mobility of the light heads, the most unusual lighting ideas and lighting concepts become reality.

On the upper floor, there is an inviting waiting area that can also be used as a small, somewhat different meeting corner. A room-within-a-room concept, that appears unobtrusively colourful, light, fresh and stylish thanks to special interior design, open elements and their unique colour scheme.

The ceiling is softened by the pendant luminaires SOFT DELTA, the large-format “ring luminaire”, from the SOFT series, in the form of a rounded triangle.

The inwardly radiating LED illumination creates a glare-free and mirror-free indirect light. A matte white housing surface of the luminaire was chosen here to match the wall design. 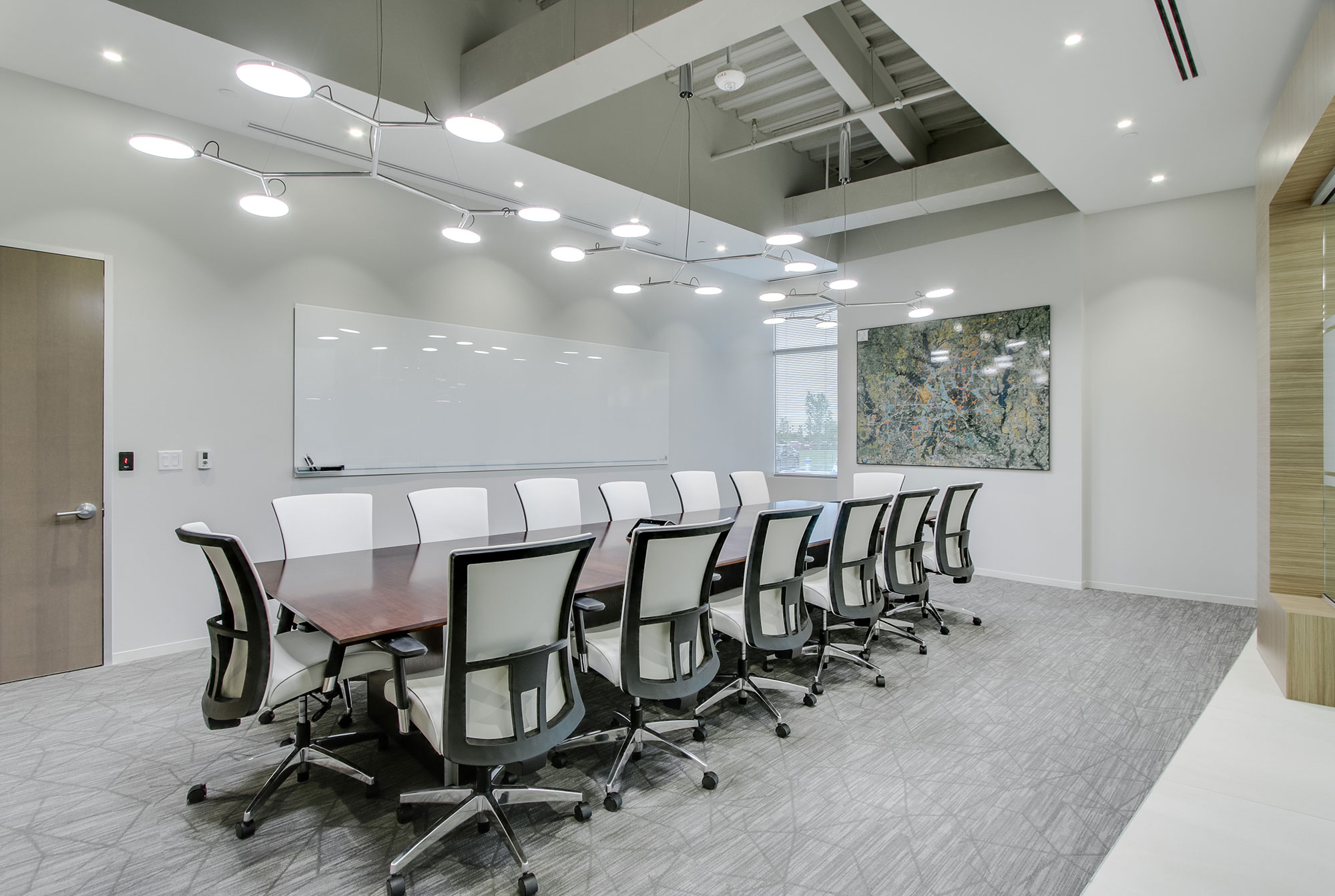 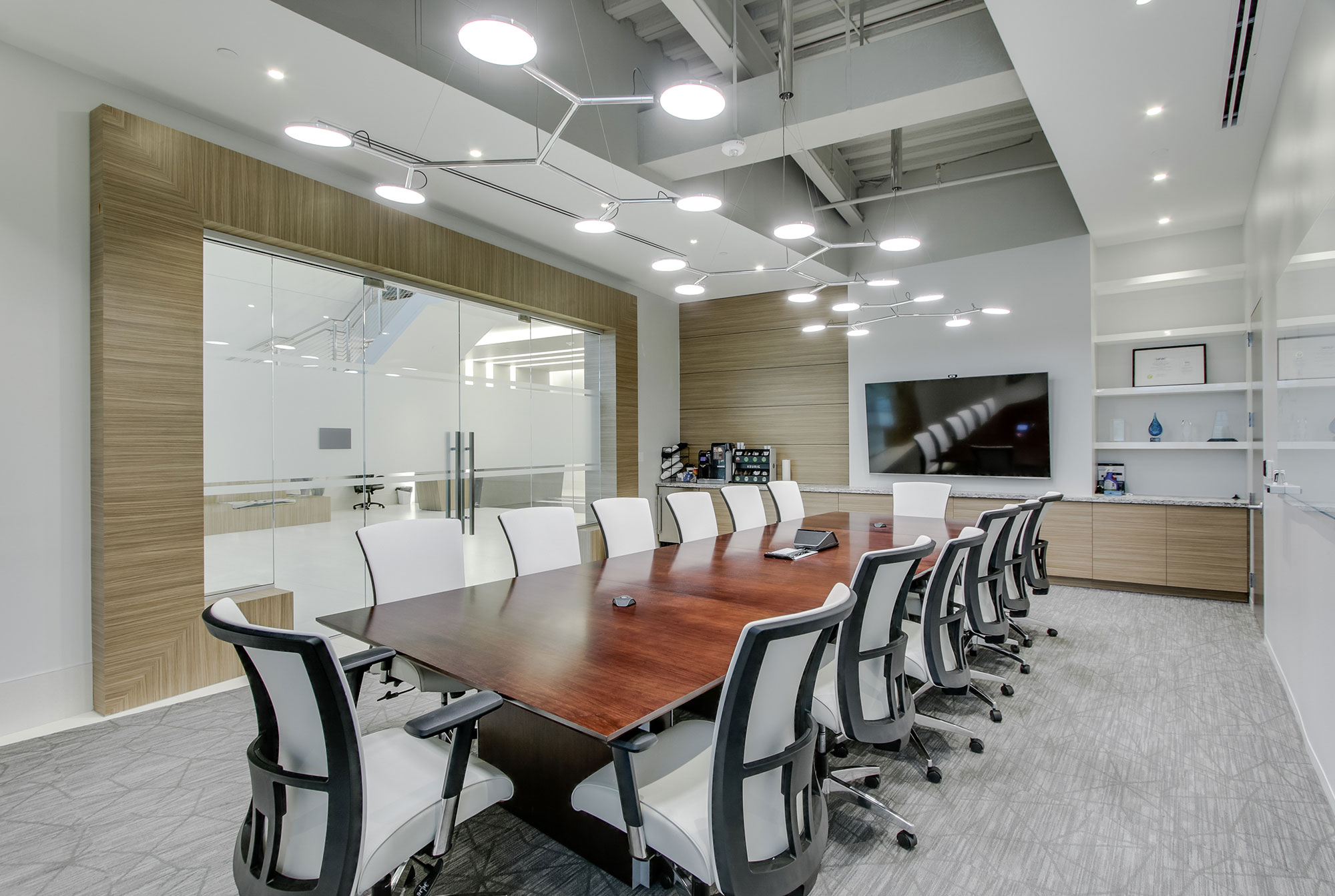 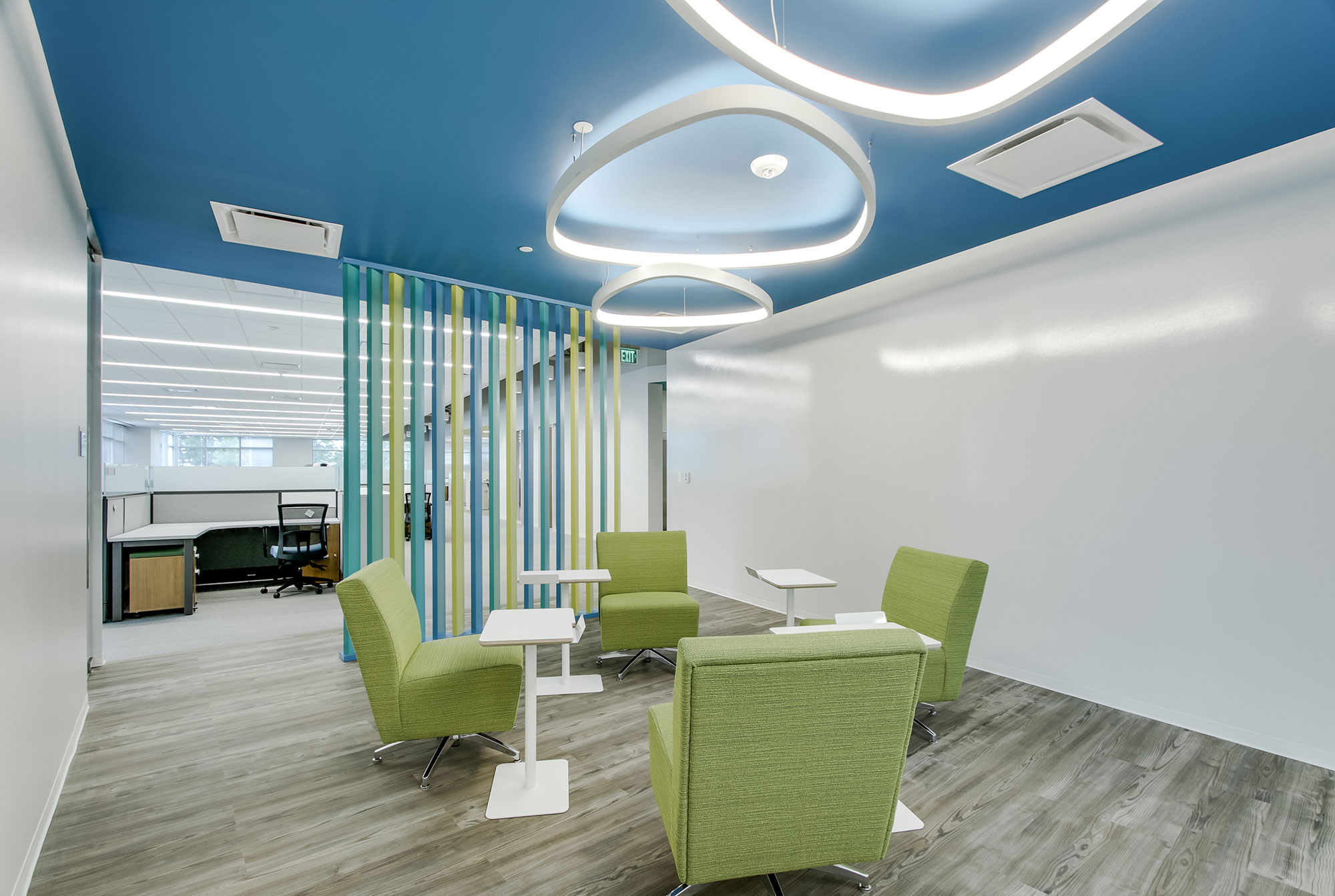 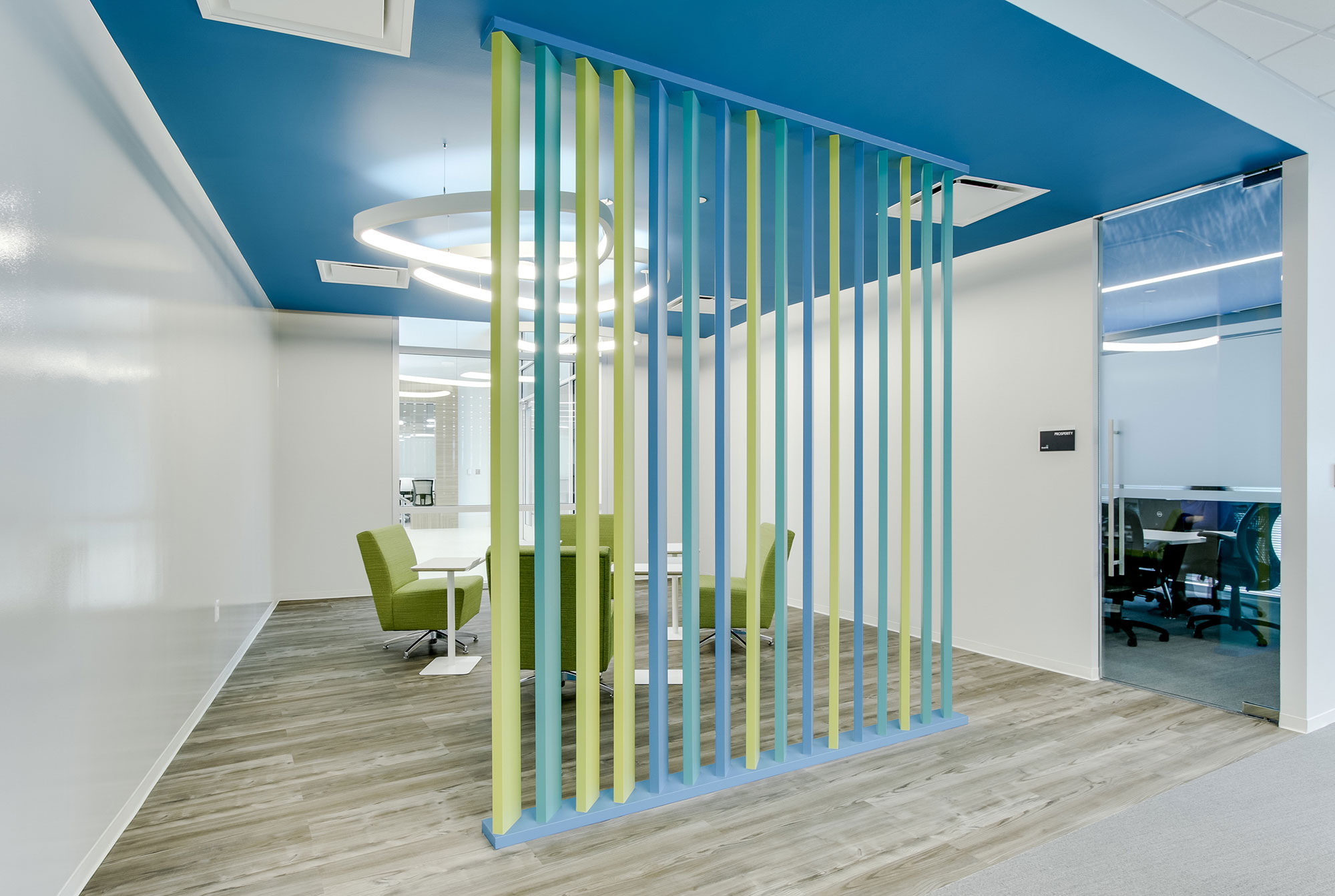